The Polar Bears belong to the species that have been hit badly due to the consequences of Climate Change. Russian Polar Bear Expert Ilya Mordvvintsev has claimed that Climate Change have started forcing the species to eat their own cubs!
The scientist has said that polar bears naturally exhibit cannibalistic tendencies… however, the tendency has increased in recent times. “We state that cannibalism in polar bears is increasing. In some seasons, there is not enough food and large males attack females with cubs. Cases of cannibalism among polar bears are a long-established fact, but we’re worried that such cases used to be found rarely while now they are recorded quite often,” stressed Mordvintsev.
The Russian has put the entire blame on human beings for this situation. He has explained that ice is melting in the North Pole because of Global Warming. Moreover, the Global Community is extracting mineral oil in those areas that are the natural habitat of the polar bears. As a result, the animals are moving out from the region, and are unable to catch their preys. Mordvintsev has further explained that the winter area from the Gulf of Ob to the Barents Sea has become a busy route for ships, carrying Liquefied Natural Gas (LNG). “The Gulf of Ob was always a hunting ground for the polar bear. Now it has broken ice all year round,” he insisted. 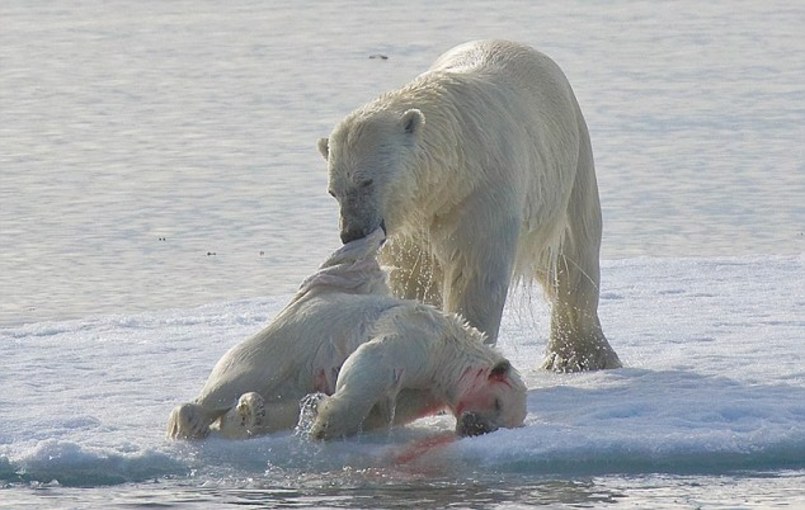 Vladimir Putin’s Russia, a key global oil and gas exporter, recently hinted that it would develop LNG potential in the Arctic. The Kremlin has already upgraded its military facilities in that region. Another Saint Petersburg-based Scientist, Vladimir Sokolov, has claimed that abnormally warm weather on Spitsbergen Island to the west in Norway’s Svalbard archipelago has badly affected the polar bears this year. He also expressed serious concern over the absence of ice floes and snow in the North Pole.
In the last two-and-half decades, Arctic ice levels have fallen by 40%. Talking to the media, Sokolov said that the polar bears would eventually no longer hunt on sea ice and be confined to shore areas and high-latitude archipelagos. He warned Russians living in Arctic settlements, saying that they should not dump garbage in their locality for giving an allowance to the polar bears to roam freely.