Nina Lvovna Khrushcheva is a Political Scientist, a Professor of International Affairs at The New School, New York, and a Senior Fellow of the New York-based World Policy Institute. Well, she possesses another identity, as well! Nina is the great-granddaughter of former Soviet Premier Nikita Khrushchev (April 15, 1894 – September 11, 1971)… She recently expressed her views on the performance of US President Donald Trump while talking to an Indian journalist. Her interview has been published in an Indian vernacular Daily. It has become somewhat clear from the interview that there is no change in perception about the US, among the Russians!

Q: President Trump has spent more than two-and-a-half years at the White House. Do you think that the idea of American people about their president has changed somewhat?
Nina L Khrushcheva: Before he became the President, the Americans thought that Trump was a selfish person, a billionaire and TV baron, who tried to convince people with his oratory skills. And in the last two-and-a-half years, the people have realised that their assumption was correct… not only the Americans, but the entire Global Community has realised the same. Unfortunately, this man is the face of the US right now!
Q: The US Federal Government shutdown of 2018-19 occurred from midnight on December 22, 2018 until January 25, 2019 (35 days). It was the longest US Government shutdown in History. Has this stalemate-situation been able to give a message to the World?
Khrushcheva: Apart from wasting time and resources, President Trump lost an opportunity to discuss his ‘Mexico Wall’ project with the Democrats. This Wall has become a symbol of his power and pride, and also of manhood! It is to be noted that a lady (Speaker of the US House of Representatives and leader of the ‘Opposition’ Democratic Party Nancy Patricia Pelosi) has emerged as the voice of protest against the president’s mega Wall project. Usually, President Trump does not give importance to Women. He had made unparliamentary remarks about Women, ahead of the Presidential Elections. Hence, a lady’s attempt to stop this project has quite a significance in the US!

Q: Some of President Trump’s predecessors had initiated these sorts of projects, and all of them were rather autocratic, in their ways! Would you consider this US President as their ideal successor?
Khrushcheva: Even during the Ancient Times, the rulers had tried to divide people by building walls… Firstly, I would like to mention about the Great Wall of China built by Qin Shi Huang (BC 220-206), who claimed himself to be the first Emperor of the Asian country. You will find numerous instances of this ‘Divide et Impera’ in modern History. During the First World War, Germany set up a Wall between (German occupied) Belgium and the Netherlands. My great-grandfather (Nikita Khrushchev) built a wall in Berlin after the Second World War, and the then ruler of the German Democratic Republic (or erstwhile East Germany) Walter Ernst Paul Ulbricht had backed the move. In 2015, Hungarian Prime Minister Viktor Orbán built a border barrier on his country’s border with Serbia and Croatia. There is also an instance of a wall that France had made so that Germany would not be able to attack them. However, the time and situation were completely different, when Khrushchev had made that move. In my opinion, Trump is a ‘Democratic Autocratic’ or ‘Mean-minded Democratic’ leader! There, of course, are so many modern leaders like him… for example, Hungarian PM Viktor Orbán, Russian President Vladimir Putin, Turkish President Recep Tayyip Erdoğan, Egyptian President Abdel Fattah el-Sisi and Indian Prime Minister Narendra Modi… they all are in the same league!
Q: During his election campaign, Trump had said that he would force Mexico to bear the expenditure for building the wall. Now, it seems that the American taxpayers will have to pay for the expenditure… Do you think that those, who had voted in favour of Trump, would agree to bear that burden?
Khrushcheva: W-A-L-L! As if the key to ‘much safer‘ future is hidden in these four letters… the common people in the US had accepted Trump’s plan as they thought that the Project would ensure their safety. Trump used to run his business from New York by cheating the people. Even, he used to raise money for his business from other sources. My firm belief is that the President considers this Mega Project as a ‘Business’. Now, he seeks money from the taxpayers to set the wall up! 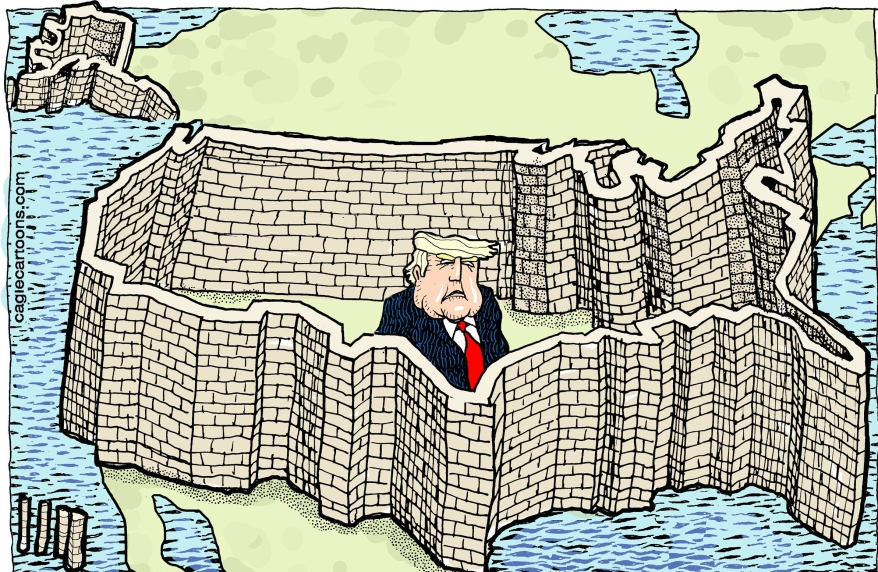 Q: You have been in the US for so many years. Is there any change in your perception about the US in the past few years? Do you think that the US has become more intolerant in recent times?
Khrushcheva: The US is a Great Nation… again, all the Super Powers would like to think ‘We are the best’ or ‘We are right’. The US is no exception to that! However, the main problem is that the common American people have a tendency to look at everything in black and white. They overlook the grey areas. One will be in crisis, if s/he ignores the presence of others, or if s/he is reluctant to correct her/his mistakes. I think that Donald Trump is a fine example of this one-sided vision (or philosophy) of Life… in a sense, he is a Pure American Product! The people of the US voted him to power… Unfortunately, they have been blaming Russia for the mistake for the last two-and-a-half years. The Americans are not ready to accept that they had made the mistake!

Q: Is there any difference between Trump’s US and Putin’s Russia?
Khrushcheva: I visit Russia every month. There are so many similarities between the two ‘Democratic Autocratic’ leaders (Trump and Putin). However, there are some differences between the two countries. We have to realise the fact that the US is not Trump’s (personal property), and Russia is not Putin’s, either. Each and every nation has Plurality!
Q: Would you like to mention any recent Students’ Movement (in the US) that has influenced the larger political scenario?
Khrushcheva: Nearly 99% of the movements take place at the College or University Campuses in the US… for example, I can mention the Me Too Movement and the Black Lives Matter Movement… We, teachers, try to encourage students not to see the world through a black and white glass. The initial step to change the aspect is to try to understand different cultures in a proper manner.
Interestingly, the Political Scientist refused to make any comment on other US policies…