Phulmoni Dasi, a nine-year-old Indian girl, had died on the first night after her marriage with 30-year-old Hari Mohan Mait in 1889. India remembers that incident (or accident?) of colonial period as The Phulmoni Dasi Rape Case! A child marriage and subsequent marital rape resulted in the death of Phulmoni, and the case led to the conviction of the husband in 1890, apart from triggering several legal reforms.
Well, another girl got married at the age of nine, too! As per the prevailing Hindu law, she had to leave her paternal home for her in-laws’ residence at the age of 11. However, the girl was not ready to leave her paternal home. Her husband was 17 at the time of their marriage. The girl decided to stay with her mother and stepfather. Her mother was just 16 when her father Janardan Pandurang passed away. As they belonged to the Suthar Community, widow marriage was a common practice for them. So, her mother, Jayanti Bai, tied nuptial knot with the girl’s stepfather six years after the demise of Janardan.
Her stepfather, Dr Sakharam Arjun, was an exceptional character… he used to believe in women’s empowerment! So, he backed women’s education. He encouraged his stepdaughter to go to a Missionary School. Dr Arjun selected a groom for her when she was nine. As the groom, Dadaji Bhikaji, was a distant relative of Dr Arjun, the latter imposed a condition on the former that he would have to stay with them after the marriage. Bhikaji accepted the condition and spent one year with the Arjun family. However, he left his in-laws’ residence after a year. Perhaps, he thought that he would never return. Later, acute financial crisis prompted Bhikaji to change his decision. He informed Dr Arjun to send his stepdaughter to him, as the wife would have to go to her in-laws’ place with dowry!
However, the 11-year-old girl was not ready to accept Bhikaji’s proposal. Dr Arjun, too, supported his stepdaughter. Although Jayanti Bai wanted her daughter to stay with Bhikaji, Dr Arjun insisted the girl to stay with them. Then, Bhikaji moved the Court, seeking Justice! In British India, there was a Law, called Restitution of Conjugal Rights, which was used by the deserted spouse against the other. At that period of time, it was a punishable offence if a married woman refused to stay with her husband. The 11-year-old girl, too, moved the Court, asking permission not to stay with her husband! 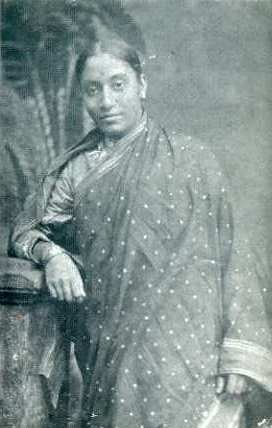 In this way, Rukhmabai (November 22, 1864 – September 25, 1955) had created history in 1885. She not only moved the Court, but also started writing columns in the Times of India, using her pen name ‘The Hindu Lady‘. She wrote for three long years, and her columns were appreciated by Florence Nightingale and Max Muller! Both Nightingale and Max Muller wrote various articles in foreign dailies, supporting Rukhmabai’s jihad against the contemporary Indian (Hindu) culture.
Rukhmabai’s articles had a great impact on the Indian Politics, as she openly attacked the Indian political leaders, saying that although they wanted Freedom from the British Colonial rulers, they were against women’s empowerment. Stalwart Indian leaders, like Balgangadhar Tilak and Vishvanath Narayan Mandlik, strongly criticised Rukhmabai for going against the Indian culture and the Hindu religion.

In 1888, the Court announced its verdict: Rukhmabai would have to stay with her husband, else she should serve a six-month jail term! No wonder, Rukhmabai accepted the jail term! Her father and other well-wishers created Rukhmabai Defence Fund in order to help her fight the legal battle…
Rukhmabai’s story might have been ended in jail. However, it did not. She was released in 1889… and, left for Britain to earn a Medical Degree. The Rukhmabai Defence Fund had enough money to sponsor her studies. She became a doctor in 1894 and joined the British India Medical Service upon her arrival in India. She worked as a famous lady doctor in Rajkot till 1929.

India still remembers Kadambini Ganguly (July 18, 1861 – October 3, 1923), the second female physician from India as well as from the entire British Empire. Kadambini, herself, was also the first Indian, as well as South Asian, female physician, trained in western medicine. The South Asian nation also remembers Anandibai Gopalrao Joshi (March 31, 1865 – February 26, 1887), the first Indian female physician to study and graduate with a two-year Degree in Western Medicine in the US. Unfortunately, the nation forgets Rukhmabai, the Indian physician and feminist who is best known for being one of the first practicing women doctors in colonial India, as well as being involved in the landmark legal case involving her marriage as a child bride between 1884 and 1888.