A Move Forward In A Backward Nation?

After putting the plate full of French Fries on the table, she said: “Many thanks to you. Welcome, and enjoy!” A perfect feminine voice, although the language was Dari or synonymously Farsi, a variety of the Persian language spoken in Afghanistan! The appearance of the waitress surprised the guests, who visited the restaurant. It was a robot! French Fries were lying on the table…

Many foreigners, who visit the renowned Times Fast Food Centre in Kabul on a regular basis, were happy to see this robot serving food items to guests. There was no speciality in the appearance of this robot-waitress. Only her face was covered in a Hijab! While enjoying cold French Fries, Zahra Barakzai said: “It depends on culture. Hijab is necessary.” The young Afghan lady also said: “It is a big deal that robots are serving food in restaurants in war-torn Afghanistan! It means we are making a steady progress.”
Mohammad Rafi Shirzad, the Manager of the restaurant, revealed that Timia arrived in Afghanistan from Japan in January. Since then, many people have visited the restaurant only to see the robot-waitress. According to the manager, Timia not only speaks ‘Thank you‘, but also ‘Happy Birthday‘ in local language! There is a touch panel on her body so that guests can place their orders. After receiving the order, Timia serves food to the guests. She makes a stop, in case she finds obstacles in her way! Nine-year-old Ahmed Zaki said that he had requested his father to bring him to the restaurant, as he wanted to see Timia. 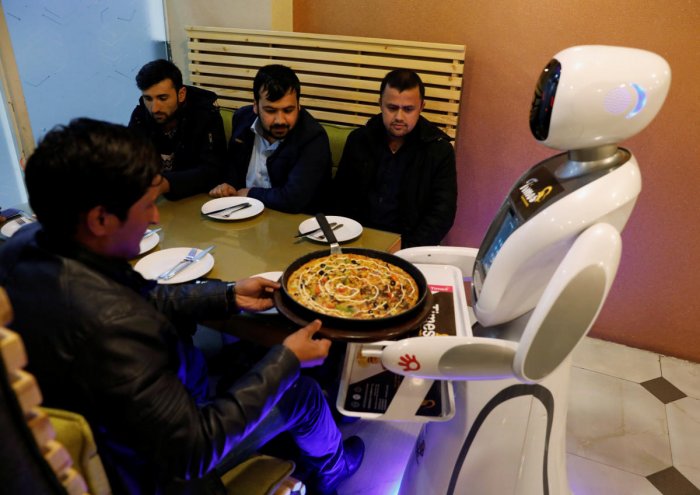 Meanwhile, Timia has also triggered a controversy in the South Asian nation. Some Netizens have blasted the restaurant authorities’ decision to bring a robot from Japan, saying on the Social Media that such a move would certainly reduce the job opportunity for the poor Afghan people!