Three years after the Bolshevik Revolution took place in Russia, stalwart Indian Leftist leaders Manabendra Nath Roy, his wife Evelyn Trent Roy, Abani Mukherji, his wife Rosa Fitingof, Mohammad Ali (Ahmed Hasan), Mohammad Shafiq Siddiqui, Hasrat Mohani, Rafiq Ahmed, M P T Aacharya, and Sultan Ahmed Khan Tarin founded the Communist Party of India (CPI) in Tashkent on October 17, 1920 with the help of the Soviet leadership. The event took place immediately after the Second Congress of the Communist International. Now, the Indian Leftists are being seen organising various events across the South Asian nation to mark the Centenary of the Formation of the Party!
Incidentally, the Leftists have marked the occasion at a time when they have become a diminishing force in the Indian Political Landscape! Currently, there are only six Leftist Representatives in the 545-seat Lower House of the Indian Parliament!

Undoubtedly, the Leftists are going through a tough time. In fact, one can divide the long history of the Communist Movements of India into three specific and major phases. Initially, the Communists and the Socialists had formed a block within the Indian National Congress Party. Later, they took part in the Freedom Movement as a separate entity.
In the second phase, ideological differences led to the split in the Party (CPI) in 1964, when two different party conferences were held, one of the CPI and one of the Communist Party of India (Marxist) or CPI(M). There is a common misconception that the rift during the Sino-Indian War, when CPI reportedly had supported China in the war, led to the 1962 split. The fact is that the split was based on the Leftists versus the Rightists, rather than the Internationalists versus the Nationalists. The presence of nationalists in CPI, and internationalists P Sundarayya, Jyoti Basu, and Harkishan Singh Surjeet in the CPI(M), proves this fact in a way!

Thirdly, both the CPI and the CPI(M) took part in Parliamentary Democracy, despite theoretical and philosophical debates within the parties, and became an important force in Indian Politics…
However, these all are history! One can trace the real history of the Communist Parties in various movements, like the Tebhaga Movement (1946-47) and Movements for Food of 1959 and 1966. During the Meerut Conspiracy Case, Muzaffar Ahmed openly talked about ‘Swaraj’ inside the courtroom, while Bhagat Singh raised the slogan ‘Inquilab Zindabad’ (or ‘Long live the revolution!’) – first coined by noted Urdu poet Maulana Hasrat Mohani in 1921 – before being hanged on March 23, 1931. Many participants of the 1930 Chittagong Uprising adopted the Communist Ideology later and became members of the CPI. The (Communist) slogan – ‘Ye Azadi Jhoota Hai!‘ or ‘This Freedom from the British Rule is but an illusion!’ – also had its specific reasons. Without trying to understand the significance of this slogan, some went on defaming the Leftists by calling them ‘Anti-National‘. One section of the People had also blamed the Leftists for not issuing condolence messages after Mahatma Gandhi was killed! However, the CPI mouthpiece had vociferated something else… The Leftist leaders of next generation have changed the position, adopted by their predecessors, in order to change the public image of the CPI, and the CPI(M). However, their move, seemingly, has failed to make much positive impact on voters, so far… As a result, the Communist Parties had to suffer a lot, managing to secure merely 7% of the votes in the last Parliamentary Elections… 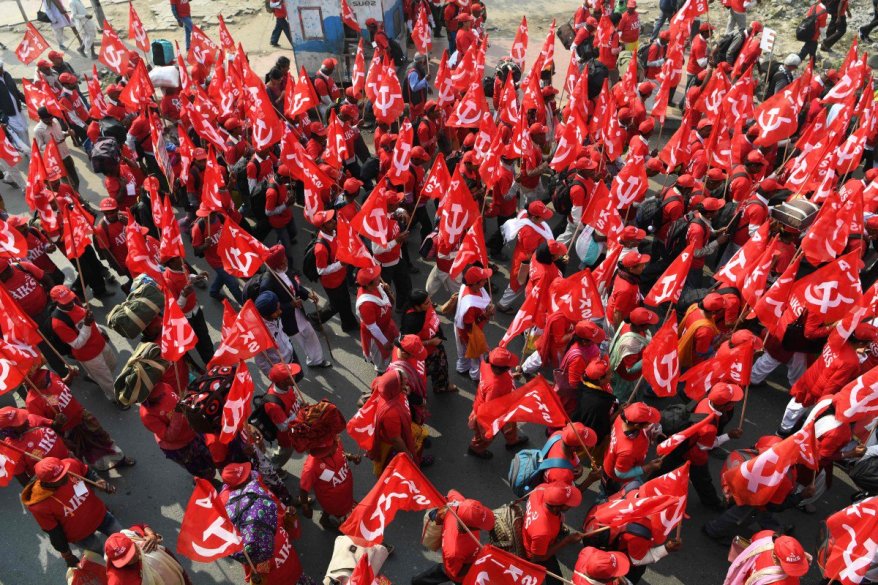 Communism in India: dead or just waiting for young saviours?

The Leftists, themselves, are responsible for their downfall. Wrong policies and unnecessary confusion are the main reasons behind their failure in resisting the growth of communal and autocratic forces in India. Moreover, they also forgot the Leftist values and nurtured Lumpens to stay in power in three provinces: West Bengal, Kerala and Tripura. The presence of Lumpens in the party (especially in the CPI(M)) has ruined their prospects. From the poor peoples’ parties, the CPI and the CPI(M) became the middle class compromise-based parties. Due to this, the Communists have lost their relevance in the National Politics.
For the Leftists, it is more than just an uphill task to regain the peoples’ trust, but not impossible! One can hope that they should purify themselves first, try to understand the current global geopolitics and then, try to work for the people. This, possibly, is the only way to make a strong comeback to the mainstream Indian Politics.