K-278 Komsomolets, the Cold War-era Soviet Project 685 Plavnik Nuclear-Powered Attack Submarine, had sunk in the Norwegian Sea on its first operational patrol on April 7, 1989, after a fire broke out in its Engineering Compartment…
For the last three decades, the Submarine has been lying a record depth of 1,020m (or 3,350f) in the Norwegian Sea. Experts have become worried after examining its wreckage, recently, as they have found that the Submarine is leaking radiation under the sea, and the radiation level is 100,000 times higher than what is to be expected in normal seawater!

Experts have tested the Komsomolets with a remote-powered device 5,500f below the sea level. The Norwegian Radiation and Nuclear Safety Authority has said in a statement that high level radiation from the ventilation duct of the sunken submarine is taking place in the sea, around 800 Bq per litre! It is to be noted that typical levels for seawater in the Norwegian Sea are around 0.001 Bq per litre, today. Hilde Elise Heldal, a Researcher from the Institute of Marine Research, stressed: “It is important that the monitoring of the Nuclear Submarine continues, so that we have updated knowledge about the pollution situation in the area around the wreck.” She further said: “The monitoring helps to ensure consumer confidence in the Norwegian fishing industry.”
There are two nuclear warheads and a nuclear reactor in the 400f-long wreckage. Norway and Russia used to monitor the sunken submarine on a regular basis in the past, and measured the levels of radiation. The main aim of the move was to measure the pollution level in the sea water from the wreckage. In the 1990s and also in 2007, the Russian Experts claimed that the radiation levels were very low! Meanwhile, Heldal said that she was not at all surprised by the recent findings given some of the earlier detection of apparent radioactive emissions. 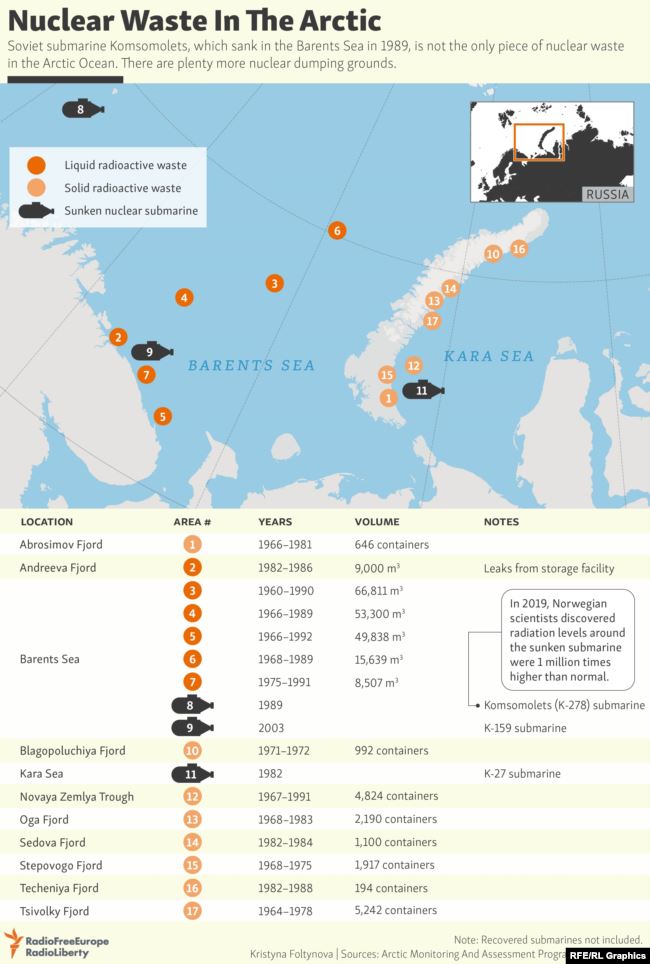 In Russian language, Komsomolets means a young member of the Communist League. The order to design the submarine was issued in 1966 and the design was completed in 1974. While the first (and only) keel was laid down on April 22, 1978 at Severodvinsk, the Submarine was launched on June 3, 1983 and commissioned on December 28, 1983! It was the deepest diving Submarine at that time, as the vessel could carry a mix of torpedoes and cruise missiles, with conventional or nuclear warheads! A fire broke out in the Engine Room because of a short-circuit, and even though watertight doors were shut, the resulting fire spread through bulkhead cable penetrations. The fire continued to burn, fed by the compressed air system. At 15:15, several hours after the boat surfaced, it sank in 1,680m (or 5,510f) of water, about 250km off Bear Island. Around 42 out of 69 of its crew-members died in the accident!
This year, the Norwegians deployed an underwater drone – the Norwegian-designed ROV Aegir 600, for the first time. “This drone made it possible to take pictures, film and also to take samples very close to the wreck,” Heldal told the press.
The Cold War has been over nearly three decades ago… however, its impact is still there in the world and the Environment has to bear its brunt!