“Power, in short, is exercised rather than possessed.” – Michel Foucault.

The shade of World Politics has seemingly turned grey… while some consider the contemporary phase as chaos under the sky, others think of it as the Era of Populism! It has become really difficult to identify a person as a Rightist, or a Leftist. According to some, traditional definitions of the Left-wing and Right-wing Politics have become meaningless. They are of the opinion that Populist Movements or Politics can be a Rightist or a Leftist one! However, looking at those events through the spectacles of Populism could create an amount of confusion, as one might not able to demarcate one from another. Experts, too, face difficulties in analysing political events in such a grey period of History. Still, one thing is clear… the year 2019, in a way, saw the end of 200-year-old Participatory Democracy, with the Right-wing Populist Politics taking the baton all over the World. In other words, the Right-wing politics has taken a new turn across the Globe!
It seems that the failure of Mass Movements and Leftist Politics has triggered the rise of Populism. The character of the Capital helps us realise the character of Subaltern people and the method or process of Labour. In a similar manner, the future of Civil Society could be guessed through military tactics! It is easily understandable that crises, which have prompted us to change our thought process, dictate the terms and conditions of new aggressive Right-wing Politics. On the other hand, protests and revolts point to new paths of social transformation! Therefore, it is important to understand the Right-wing politics to understand the Left-wing politics, and vice versa.

Populist politics has started gaining ground everywhere… in Brazil, in the US, in the UK, in France, in India… at the same time, the Left-wing politics faces difficulties in countering the growth of Populism! The Leftists try to find out a way to weaken the strength of Populism… or aggressiveness. How can materials – like mass, welfare, the unifying force of subaltern people, the concept of nation and unity, and other thoughts about the economy – be brought to the forefront of politics, again?
The crisis in Representative Democracy, the growing differences between Electoral Majority and Social Majority, the Militarisation of Democracy and attacks on Democratic Rights have prompted people to stage anti-Government protests in different parts of the Globe in recent times! Everywhere, people expect that the existing path, itself, will show the new way. However, there is a possibility for the protesters to become victims of the existing legal system while following the path. 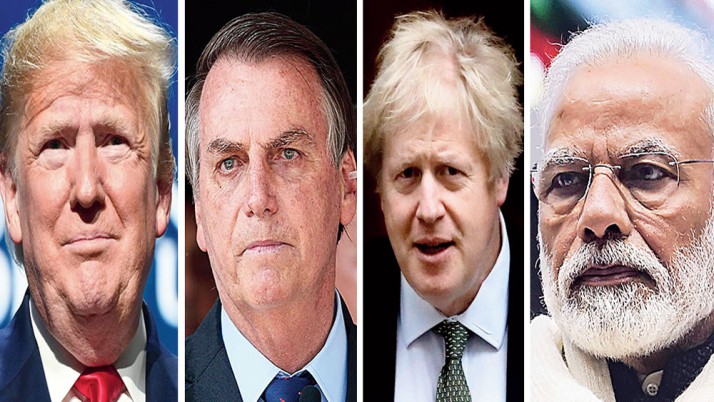 The differences between Street Politics and the Parliamentary Politics have increased a lot in India, Brazil, Britain and France. The voice of Legislature (or the Parliament) has disconnected from the voice of people. As the Judiciary maintains silence, it becomes easier for the authoritarian Governments to encourage social, economic and political discrimination! As a result, the Social Majority has lost its importance in a Democratic Structure. The emergence (or resurrection) of Mass Media, Militarisation of the Electoral Process, and the overemphasis on the Rule of Law have made Justice a secondary issue. At the same time, the neo-liberal economic reforms, decrease in Subalterns’ income, curtailment of job security and social protection, and the centralisation of power have given birth to a new concept of Power that has turned Nationalism into Ultra-nationalism!
The economic basis of this new regime is, basically, a reflection of the Global trend. Apart from exploiting the natural resources and deploying the Subalterns to the process of accumulating primitive Capital, the ruling class has built the infrastructure, privatised important sectors and made the Capital super-active in the modern world.

Any economic or political initiative outside this Right-wing atmosphere could be declared illegal. The conflicts between the Judiciary and the vast range of society, economy and politics (lies outside the Judicial structure) identify the situation in a country! In Brazil, France, the US, India, an attempt has been made to make the Judiciary a pillar of the authoritarian Right-wing rule. So, the current situation in those countries is not at all surprising…
On the other hand, the Mass Movements, too, have changed their character! These movements are facing various adversities. Still, the return of (former Brazilian President) Lula da Silva, and the Yellow Vests Movement in France indicated a change in 2019. Perhaps, the strength and appeal of these movements would determine the fate of Politics in the coming years, and help the Leftists find a new path to counter the global influence of Ultra-Rights.

It seems that the contemporary time is an interim phase of History. One may describe the near future as a Phase of Destruction‘ or a Phase of (De)construction… but, one thing is for sure that the rise of Ultra-Right-wing politics is all set to clash with the Mass Movements, worldwide! This confrontation will certainly change our ideas on many concepts, such as Representative Democracy, Law, Judiciary, Nation, Nationality, Solidarity, Economy, Leadership, Pluralism, etc. Perhaps, the new Political Spirituality would give birth to a new Political Consciousness.
One can definitely term this as a far fetched dream! However, the current global chaos can only be characterised as an interim phase…