Why do people feel sad? The UN believes that poverty is not the only cause for sadness…

In its latest Human Development Report, the World Body has said that “…every minute: 70 people escape poverty (or 1.166 persons per second)“. It means the poorest of the people have started enjoying the basic benefits, such as food, clothing, accommodation, child education and medical treatment. Even some developing nations have made a steady progress in various aspects, like nutrition, education, life expectancy, etc. Although the poverty has been reduced, inequality has been increased in those countries. The growing differences between the rich and the poor, the powerful and the powerless become a major cause of grief today. People are staging anti-Government protests in different countries. Somewhere they protest against the increase in train fares, elsewhere they protest against the hike in petrol prices and the like… or demanding political and social rights!
The UN is of the opinion that the trauma of injustice and inequality triggers the worldwide protests. This misery cannot be reduced by providing the poor with more money, as power has created the inequality. The World Body clearly mentioned in its report: “… societies are creaking under the strain of this assumption, and while people may protest to keep pennies in their pockets, power is the protagonist of this story: the power of the few; the powerlessness of many; and collective power of the people to demand change.”

Usually, the inequality is considered as a topic of Economics. However, the UN has made the issue a Political one, by discussing inequality and the variation of power in its Human Development Report, 2019. According to the UN, it is not possible to reduce poverty and illiteracy only by allocating extra money. “In some cases, addressing the barriers to equality mean tackling social norms embedded deep with a country’s history and culture… They often need to address social norms, policies and institutions formed deep in history,” said the Report.
Poverty is multifaceted, and it is wrong to explain poverty only from the aspect of income. The idea of human development lies on this introspection! Nobel Laureate Indian Economist Amartya Sen’s ‘Capability Approach Development‘ has always been at the centre of Human Development Reports published since the 1990s. The Capability Approach Development expands the real freedoms of people. In the Capability Approach, poverty is a situation where people lack the most basic capabilities to lead a reasonable life. The Human Development Index is created on the basis of that.

The UN determines the status of various countries on the basis of progress they make on different areas, like rate of maternal mortality, infant mortality, malnutrition and illiteracy. After facing criticism, many countries have adopted various policies for the rapid improvement of life. And, they have successfully managed to reduce poverty, as well as to improve the education system! Meanwhile, majority of the countries have started promoting the poverty alleviation as a success! The UN has reminded them of the fact that these initiatives are not enough as far as overall human development is concerned. Success in achieving basic nutrition or literacy level is the minimum requirement in today’s world. The Governments will have to ensure equality in higher education and in accessing digital technology. Similarly, women’s franchise is not enough… women should contest the polls.
This Report raises a serious question about the traditional limitations of Economics. It also suggests experts to prepare a new index for measuring inequality, and not only poverty. The Report has concentrated mainly on the places of various countries in the human development index. However, the UN did not forget to mention that development is necessary not only to alleviate poverty, but also to resolve the social problems. 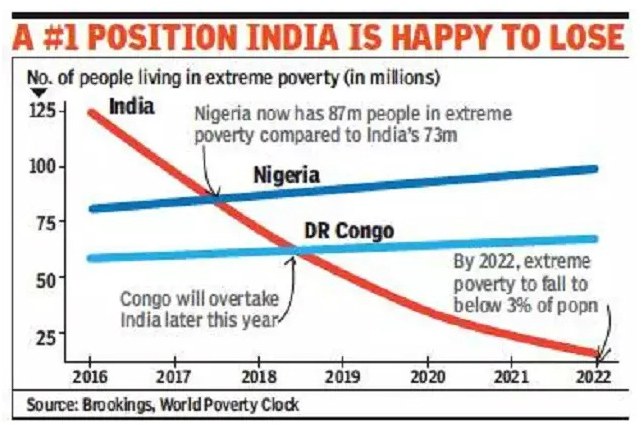 Therefore, the issue of inequality should be at the centre of development…