In earlier days, people used to preserve the bodies of their ancestors in Chile, Peru and Egypt. Those preserved bodies allow us to guess what those faces might have looked like. However, there was no way to know those faces properly. Modern Technology has made it possible. Recently, we have come to know what those people looked like 2,000 years ago!
Karen Fleming – a student pursuing her Master’s Degree in Forensic Art & Facial Identification at the University of Dundee, Scotland – has made this seemingly impossible task, possible! Working from a skull, she re-created the face of an Iron Age woman, who died nearly 2,000 years ago. Karen recreated the features of the druid, a toothless woman in her 60s, by using 3D wax! The skull, nicknamed ‘Hilda’, had been kept at the University of Edinburgh’s Anatomical Museum since 1833! 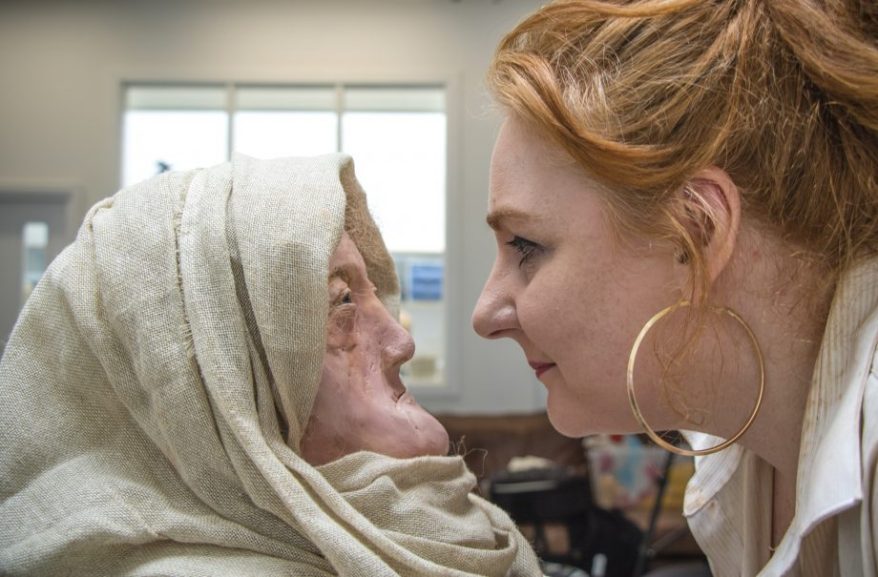 In ancient Britain, druids were members of a high-ranking professional class in Celtic cultures. They, perhaps, are best remembered as religious leaders, who were also legal authorities, adjudicators, lore-keepers, medical professionals, and political advisers! However, their lives were mostly shrouded in mystery! Some of them were magicians, who could foretell the Future. They even used to claim that they had direct contact with God!
The skull of the lady, whose face has been recreated by Karen, was also from the Druid community. The woman, believed to have been from Stornoway on the Isle of Lewis, was most probably a magician. Hilda, the toothless Iron Age woman, believed to have been well into her 60s and it was an impressive feat, as the maximum life expectancy of women was around 31 years at that time. A DNA test has revealed that she had died at the age of 60!

According to Karen, Hilda belonged to an aristocratic family. Therefore, it was possible for her to take very good care of herself. “It’s impossible to know for sure when (Hilda) died as we were unable to carbon-date the skull, but assuming the information in the journal from 1833 is correct, (she) passed away anytime between 55BC to 400AD…,” stressed the researcher.
Talking to a British News Channel, Karen said that she carefully created each and every muscle of Hilda‘s face. Interestingly, Hilda’s face has a lot in common with modern day 60-year-old women! Karen said that it was fascinating for her to recreating the face, but it was also challenging. She told the News Channel that it became really difficult for her to overcome the weather. Due to the heatwave, the wax face risked melting, added Karen. “It’s funny to say it now, but I had to keep parts of Hilda, like her wax-modelled ears, in the fridge for most of the summer. As a mature student, who commutes from Edinburgh, I often had to keep her cool in the car, strapped up in the passenger seat. I’m sure that’s a sight passers-by won’t forget seeing,” insisted Karen.

The Duncan of Jordanstone College of Art & Design’s Masters Show, which began in Scotland on August 16, is displaying Hilda‘s face.