There are a lot of stories about Lady Edwina Mountbatten’s love affairs. However, we do not have much information, as well as the inclination to discuss, about Lord Louis Mountbatten’s personal life! Recently, a book has shed light on the personal life of the last Viceroy of British-India, as it claims that Lord Louis was a bisexual!
Andrew Lownie, the Fellow of the Royal Historical Society, has penned the book – ‘Their Lives and Love: The Mountbattens‘ – after going through the secret files of the Federal Bureau of Investigation (FBI). It was an open secret that their marriage was not bound by any rules; both of them had extra-marital affairs, and their daughters Patricia and Pamela admitted that fact many years ago. In her publication, Pamela clearly mentioned that Lady Edwina had enjoyed her relationship with Pandit Jawaharlal Nehru, the first Prime Minister of India. However, no one spoke about Lord Louis’ affairs. Once, he, himself, said: “I and Edwina became the bed partners of many, during our conjugal life.” Since his assassination (by the Irish Republican Army) on August 27, 1979, many rumours on his personal life have been spread. Britain’s Prince Charles used to like Lord Louis – an uncle of Prince Philip, Duke of Edinburgh, and second cousin of Queen Elizabeth II. Many a times, Prince Charles said that ‘Uncle Dickie’ was not only his mentor, but also his most favourite person in the Royal Family! 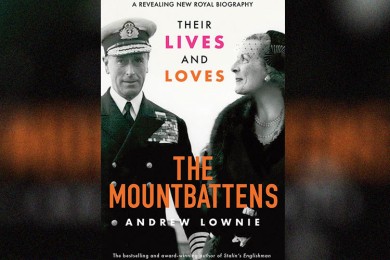 The FBI’s secret files contain information, covering three decades. Since Lord Louis became the Supreme Allied Commander of South East Asia Command during the World War II, the US intelligence agency had collected information about him. In those files, Lownie found comments (on Lord Louis’ personal life) of some important personalities according to whom the last Viceroy of British-India was least bothered about morality! He used to like young men a lot. One such eminent personality said that the British Government was in a dilemma whether to appoint him as Supreme Allied Commander due to his nature. Lady Edwina, too, was fickle-minded. However, it’s still not clear whether the British Government had received those FBI files…

Ron Perks, Lord Louis’ driver in Malta in 1948, alleged that he used to visit the Red House, a gay brothel in Rabat. The US had shown interest in the British Royal family member during the Suez Crisis in 1956. Lownie reportedly mentioned in his book that many FBI files on homosexual Lord Louis were destroyed in May 2017, and those files contained information collected in April-July 1956. The US Government admitted that those files were destroyed only after Lownie made an attempt to get access to them.
In the mid 1950’s, Lady Edwina was said to have developed a relation with the then Indian Defence Minister, Krishna Menon! Later, she reportedly enjoyed relationships with many American Human Rights activists. At that time, the FBI was preparing reports on Lord Louis’ homosexuality. Later, it sent those reports to the Judiciary. The intelligence agency also prepared a memo in 1957 in which it clearly mentioned that Lady Edwina had a (physical) relationship with famous singer Paul Robeson! Apart from Robeson, she also developed relationships with Caribbean singer and musician Leslie Hutchinson and Lieutenant Colonel Harold Phillips. During this period, Lord Louis entered into a long-term affair with Yola Letellier, the boyish Frenchwoman! Pamela wrote that her father was upset after he had come to know that his wife had a lover! According to the daughter, her parents tried to compromise with each other only to ensure a peaceful co-existence, instead of making an attempt to overcome the crisis.

As per a 1968 FBI file, Lord Louis also developed homosexual relationships with then British Prime Minister Anthony Eden and senior diplomat Sir Harold Anthony Nutting, during the Suez Crisis. His handsome figure helped the member of the British Royal Family (physically) attract a number of eminent personalities, like playwrights Noël Coward and Terence Rattigan, actor Ivor Novello and journalist-turned-MP Tom Driberg.
A biographer of Driberg, Francis Wheen once claimed that he had a letter in which it was written that Lord Louis, at the age of 17, had invited the author of the letter to get involved in a homosexual relationship with him. Lownie also traced evidence of a seeming relationship between the 13-year-old Lord Louis and his private tutor Frederic Lawrence Long. Louis, as a teenager, had spent several weeks in Dorset recovering from whooping cough. During that period, Long – an unmarried man in his 30s – used to teach him. However, their relationship lasted long after the summer of 1914. In 1916, Long wrote: “As you know there is only one Dick in the world for me and there never will be anyone before or anywhere near him in my affections. It is hardly necessary for me to add that I would give anything to wipe the floor with you. Goodbye my best beloved and dearest kid.” Interestingly, Long officiated as a priest at Louis and Edwina’s wedding. However, Lord Louis made no reference to him in letters to his family.

The newly released FBI files portray the Mountbattens as ‘persons of extremely low morals’… Morality, perhaps, never be the only yardstick to judge a person’s character (through her/his personal life)!