Narendra Damodardas Modi has become the Prime Minister of India, once again! The outcome of the 17th Parliamentary Elections, that was held recently, is – to some extent – similar to the 16th Parliamentary Polls held in 2014… there should be no point of disagreement or controversy with Modi’s growing popularity in the country! The seasoned politician led his Bharatiya Janata Party (BJP) to a landslide victory, with the ruling party winning 303 seats (272 seats needed for absolute majority) in 543-member Lower House of the Indian Parliament, while the Ruling Coalition or the National Democratic Alliance (NDA) managed to amass a total of 353 seats. We have to admit that a person, who has made this happen twice in five years, has rightly understood the pulse of India!
The Political Analysts believe that Modi’s victory in 2019 is remarkable, compared to 2014! Five years ago, a Modi Wave had rocked the South Asian Nation, as an Opposition leader had gained the trust of the people who thought that he could lead the nation to prosperity! Literally, Modi had emerged as the Chapman of Dream! On the contrary, the victory in 2019 is the victory of the Administrator Modi. It’s not a victory for the Challenger Modi, but for a known and tested Modi! The people of India have experienced his rule, realised his thought process, and decided to stay with him for another five years… The people did not consider the successes and failures of his Government while casting their votes, but backed his concept of (Ultra?) Nationalism. It is really difficult to secure absolute majority after ruling a country for five years, keeping in mind the anti-incumbency factors!

The outgoing Government had created many controversies in the last five years, as a number of protests against poor governance or administrative failures were staged in different parts of the country. Many people had criticised the Government’s Ultra-Nationalist Ideology and Agricultural Policies. The Rate of Unemployment, too, increased in the last five years… still, the outcome of the 17th Parliamentary Elections has made it clear that the people have faith in Modi’s leadership! In fact, the Balakot Air Strikes won the heart of the Indian Civil Society. Now, the people of India have realised why Modi made the Air Strikes an election agenda, ignoring the Election Commission’s advice! The majority of the Indians have not only accepted the PM’s Anti-Pakistan stance, but also backed his view on the Minority Community!
Narendra Modi’s return to power indicates a big change in the Indian Society. Instead of Social and Economic Policies, the idea of Nationalism has become important for the society, despite the fact that the idea is dividing the nation! It is unfortunate that this division does not bother ‘New’ India! It might be the real cause for concern for the next five years… still, there will be some expectations! Perhaps, Modi will rule India in a different way in the coming years, his Policies may try to develop different parts of the Society of this huge ‘country with diversity’ with Development-oriented Projects. 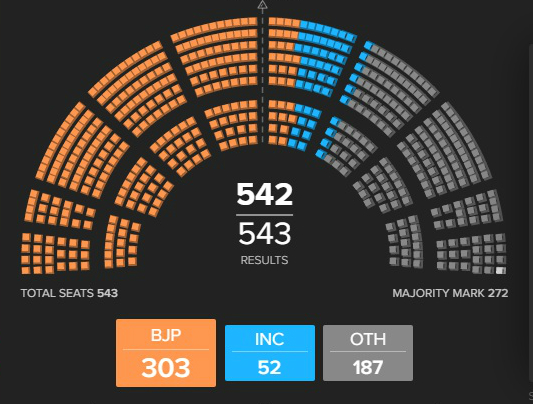 Modi should remember that he would have to meet the expectations of nearly 1.37 billion people, as their faith in him increases his responsibility. He is the second Indian PM in five decades (after Indira Gandhi) to come to the power for a second consecutive term with an ‘Absolute Majority’. In that sense, this victory is historic.
At the same time, the Opposition parties, too, will have to learn a lesson from their defeat. Rahul Gandhi, leader of the main ‘Opposition’ Indian National Congress (INC) Party, worked really hard for the last two years. Other Opposition parties, too, came closer to each other in the last couple of years and told the people that Modi and his BJP would be ‘dangerous’ for India. However, the people have rejected their ‘advice’! Therefore, the Opposition have got five years to prepare their strategies and counter- strategies. They would have to realise the fact that the people do not always accept personal attacks on a politician… they want a Government that could ensure stability and run the nation on the basis of solid agendas! It would be a challenge for the Oppositions to set agendas and to make them acceptable to the people.

Modi deserves credit for his party’s overwhelming success in the recently held elections. This unprecedented victory itself tells the story of his leadership quality. Rahul Gandhi, too, deserves the credit for showing political maturity. Immediately after the announcement of poll results, he congratulated Modi, saying: “The public has clearly given its decision. Frankly, today is the not the day to discuss what I think went wrong, because people of India have clearly decided that Narendra Modi is going to be their Prime Minister and as an Indian, I respect that…”
This election was a disaster for the INC, the oldest political party in India, which got just 52 seats. Rahul Gandhi, himself, lost the election from Amethi. Still, he held his nerve and accepted the mandate. Many contemporary Indian politicians should learn a lesson from Rahul Gandhi, who shows that it is important for a person to accept defeat sportingly.

This election has given a ‘specific and clear’ message to all the parties… we can only hope that each and every Opposition leader will understand the message in her/his own way, and strengthen the Indian Democracy in the next five years!
Congratulations… the People of India!!!