The two nations share belligerent ties and have always maintained a safe distance. However, outgoing German Chancellor Angela Merkel has decided to correct the history! During her recent two-day trip to Greece, the chancellor declared an understanding of the amount of suffering brought to the south-eastern European country during the WWII, saying that “Germany recognises the responsibility for Nazi crimes in Greece”.
Upon her arrival in Athens on January 11, Chancellor Merkel held separate meetings with Greek Prime Minister Alexis Tsipras and President Prokopis Pavlopoulos to discuss various aspects of bilateral ties. The three leaders also discussed the wartime compensation – the most controversial bilateral issue.

A couple of years ago, Germany claimed that the matter was resolved through a treaty in 1960 with the intervention of the European countries. As Greece was not satisfied with the amount of compensation, the two nations got involved in a conflict. The bilateral relations touched a new low during the Greek government-debt crisis (or the Greek Depression) in 2007-08. When the Greek government imposed strict fiscal austerity in early 2010 in order to save its economy, people across the country slammed the German chancellor for destroying the Greek economy by adopting aggressive policies. Even, critics accused the Merkel government of hypocrisy, of pursuing its own national interests via an unwillingness to adjust fiscal policy in a way that would help resolve the Eurozone crisis.
Greeks had staged protests when Chancellor Merkel visited Athens in 2012 and 2014. To avoid such a situation this time, the Tsipras administration deployed thousands of security personnel in the capital city ahead of the chancellor’s arrival. And the seasoned German politician surprised the people of Greece with a positive gesture. The chancellor recognised Germany’s historical responsibility for crimes committed by the Nazis in Greece, saying: “We know how much suffering we, as Germany in the time of Nazism, have brought to Greece. That is why it’s a lesson for us to do everything to have good relations with Greece, and to lend each other support for the prosperity of both countries.” 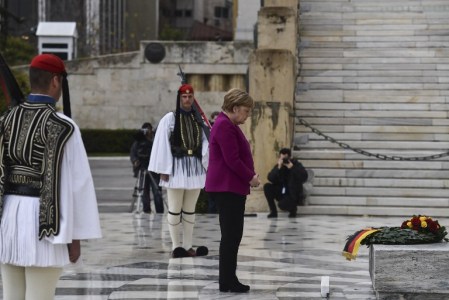 German Chancellor Angela Merkel pays tribute at the Tomb of the Unknown Soldier in Athens on January 11, 2019 (Image: AFP)

Earlier, the Yad Vashem Memorial Centre revealed that of 77,000 Jews living in Greece at the time of WWII, around 60,000 were murdered during the Holocaust.
It is to be noted that the then German President, Joachim Gauck, had sought public forgiveness in 2014 in the name of Germany from relatives of those murdered by the Nazis in the mountains of northern Greece. It seems that Chancellor Merkel took a little bit of time (almost five years) to implement the promise she had made in 2014.