December 1 is quite an important date in the Global History! Most probably, the date is even more important than March 7, which is marked as International Women’s Day! A century ago, Nancy Witcher Langhorne Astor (May 19, 1879 – May 2, 1964) became the first female Member of the British Parliament on this day (December 1, 1919). The America-born British politician served as MP from 1919 to 1945.
Since the inception of the British Parliament in 1265, no woman entered the House of Commons before Lady Astor. Although Constance Markievicz of Sinn Fein had become the first elected female MP in 1918, she refused to take up her seat in line with her party policy. Therefore, Lady Astor was the first female MP to enter the Temple of Democracy 654 years after the establishment of the Parliament. From Angela Merkel to Theresa May, all the modern day female politicians carry the legacy of December 1!

Lady Astor was born on May 19, 1879 in Danville, Virginia, the US. She was the eighth child of her parents’ 11 children! While studying in New York City, she met her first husband and socialite Robert Gould Shaw II. They married in New York on October 27, 1897, when she was just 18. Five years after giving birth to their only son Robert Gould Shaw III (on August 18, 1898), Lady Astor divorced Shaw (in 1903). She left for Britain in 1905 and fell in love with the country. She won the heart of the elite British society with her knowledge and charming personality. In 1906, she married Waldorf Astor, who was also an American expatriate, and, incidentally, was born on the same day as she (May 19, 1879)!

Waldorf Astor won the Parliamentary Election as a Unionist for the borough of Plymouth in December 1910 and held the seat until the constituency was abolished in 1918. Later, he moved to the borough of Plymouth Sutton. He had to forfeit his seat of Plymouth Sutton in the House of Commons in 1919 after he became a member of the House of Lords. Then, Lady Astor decided to contest the by-election for the vacant Parliamentary seat and defeated her nearest rival by a huge margin. She took up her seat in the House on December 1 as a Tory Member of Parliament. During a press conference, the journalists asked her whether her marital status helped her win election… and she replied: “I married beneath me, all women do.”
Lady Astor’s biggest achievement was the Intoxicating Liquor (Sale to Persons under Eighteen) Act, which was popularly known as Lady Astor’s Bill. It was the first private member’s Bill tabled by a lady to become an Act of Parliament. The Act raised the age for consuming alcohol in a public house from 14 to 18, and remains in force till date!

Lady Astor had always advocated Women’s Rights in her own style. She is known to have had engaged in an argument with Sir Winston Churchill over this issue. During their meeting at the Blenheim Palace, Lady Astor raised different agendas about Women’s Rights. And, Sir Winston countered her each and every argument. At last, fed up Lady Astor told Sir Winston: “Winston, if you were my husband, I’d poison your tea.” to which the former British PM replied: “Madam, if you were my wife, I’d drink it.” 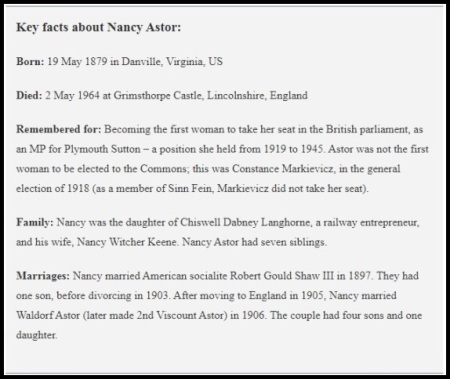 Lady Astor served as Parliamentarian for 26-long years till her retirement in 1945 at the age of 66. She died on May 2, 1964 at the age of 85. Astor did not lose her sense of humour even in her deathbed. When she found so many people near her bed, she, reportedly, asked her youngest son Sir John Jacob Astor VII: “Jakie, is it my birthday or am I dying?”