She loves John Lennon’s famous song ‘…Nothing to kill or die for, And no religion, too…’ Like Lennon, she (too) wants to change her surroundings! She is trying to draw a balance by normalising ties between the two neighbours through Hebrew and Sephardic songs!
Liona Hotta is a young lady of Jewish descent from Spain! Currently, she is working with eminent musicians to spread the message of peace. Her own experience has taught her that we can ensure peace by defeating hatred with love! 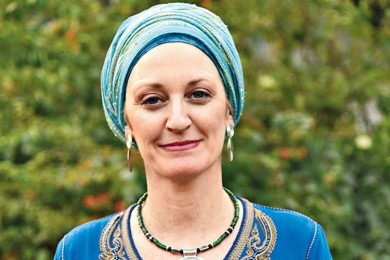 Liona recently shared her personal history with the Indian media. She said that her parents were performers (like her) and also holocaust survivors. However, her grandparents were not so lucky, as they reportedly perished in the Auschwitz gas chamber. Liona has also learnt that the rule of religion can ruin the world. So, she doesn’t believe in religion. Her only aim is to protect the history!
Liona decided to save Hebrew literature and music, and other elements pertaining to the Jewish culture a couple of years ago… and she, along with some of her friends, had formed a band – Liona & Serena Strings – in 2017!

She is trying hard to re-introduce the spiritual Hebrew songs to the global community through the creations of Rabbi Yehudah Halevi. Liona – who recently attended a music festival in eastern Indian city of Kolkata – told the local media that she had searched for spiritual (and not religious) Hebrew songs in the past. She wants to tell the world that the rich tradition and culture of the Jews are not confined only to religion. The performer believes that the memories of destruction will help her find the way to peaceful coexistence!
The young lady from Spain knows that India – a ‘secular’ state with no state religion – is the birthplace of four of the world’s major religious practices: Hinduism, Buddhism, Jainism and Sikhism. Throughout India’s history, religion has been an important part of the its culture, as the South Asian nation is home to at least nine recognised forms of religion, such as Hinduism, Islam, Christianity, Sikhism, Buddhism and Jainism. Zoroastrianism, Judaism and the Baha’i Faith are also practiced in India. Still, the country has failed to avoid religious discrimination. In fact, colonial India was divided into two separate states – one with a Muslim majority (Pakistan) and the other with a Hindu majority (India) is commonly seen as the outcome of conflict between the two nations’ elites. Liona knows that it’s the ‘global character’ of religion!

The singer stressed: “Holocaust is present in different countries in different forms. The memories of destruction should not trigger more destruction. That’s why I love songs of a particular time when Europe was not so divided. At that time, the Jews were not forced to leave the European countries.” Liona added: “I chose Sephardic songs purposefully. The original Jews of Spain are basically people of that particular tribe… and they used to spread love!”
Liona was not alone. Many such artists from Cyprus, Cape Verde, Egypt, Hungary and other countries attended the music festival in India with the ‘message of peace’. Before leaving for Spain, Liona expressed hope that the ‘tune of love’ might encourage the belligerent neighbours to co-exist peacefully in coming years!