Many elderly patients visit the Meander Medical Centre in the Netherlands for receiving treatment. A thousand-year-old patient had arrived at the Centre as well for a medical check-up a couple of years ago! The patient, however, could not respond, walk, or even breathe, as it was an ancient statue of a Buddhist monk, which was preserved at a Dutch Museum!
Although the Museum authorities had claimed that there was a human body inside that statue (as it served the purpose of a sarcophagus), the scientists had no proof of that. It was brought to the Centre in order to shed light on the ancient mystery. A CT Scan of the gold-painted statue stunned the physicians and researchers, as it revealed that there was a mummified monk inside the statue! What seemed to be a statue from outside was actually a metal cover on a mummified monk, named ‘Liuquan‘, meditating in a lotus position. 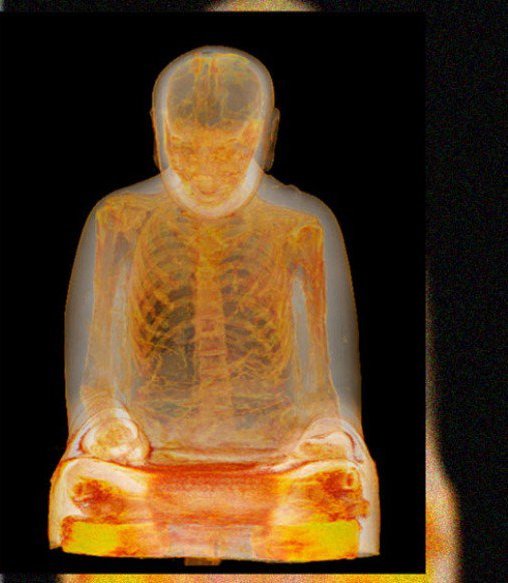 After DNA testing of the sampled bone material, the doctors found that Liuquan’s organs had been removed and replaced with scraps of paper printed with ancient Chinese characters and other material that presumably have rotted. Medical experts are yet to find how all the organs were removed from his body, and how he got mummified.
Buddhist Art and Culture Expert Erik Bruijn has said that the body inside the statue was of Buddhist Master Liuquan, who was also a member of the Chinese Meditation School. He passed away around AD 1100. In the presence of Radiologist Ben Heggelman, Bruijn stressed that the process of self-mummification was popular in ancient Japan as the Japanese monks used to believe that such a move would help transform themselves into revered Living Buddhas! Later, it became popular in China and other Asian nations.

In his publication ‘Living Buddhas‘, Ken Jeremiah described the process of self-mummification. He wrote that the monks did so by following a very difficult diet chart. According to Jeremiah, the monks gradually starved their bodies, thus, enhancing their chances of preservation. They did not consume food items made from rice, wheat and soybeans, and preferred to eat nuts, berries, tree bark and pine needles in gradually lesser quantities, in an attempt to reduce their body fat and moisture. It could cause corpses to decay. They also ate herbs, cycad nuts and sesame seeds to inhibit bacterial growth, apart from drinking an otherwise poisonous tree sap that was used to make lacquer so that the toxicity would repel insects and pervade the body as an embalming fluid. After years of adhering to the strict diet and nearing starvation, the monk was then buried alive in an underground chamber. Breathing through a bamboo tube, he would sit in a lotus position and chanted Sutras in the darkness. Each day, he rang a bell inside the tomb to signal that he remained alive. When the peals finally ended, the air tube was removed and the tomb sealed! After three years, the followers would open the tomb, and take his mummified body to a nearby temple, to be venerated. If the body did not mummify, an exorcism was then performed and the monk reburied.

Some practicing Buddhists believe that mummified monks are not dead, but in a deep meditative state, popularly known as ‘Tukdam‘. Experts are of the opinion that those, who tried to make mummies of themselves, were rarely successful. The researchers discovered a mummified monk in a lotus position, believed to be around 200 years old and wrapped in cattle skin, inside a house in a remote province of Mongolia, in January 2020.

Meanwhile, this is for the first time when the mummified body of a Buddhist monk has been found inside a statue.