A Look Inside A Cupboard

Hundreds-year-old Renaissance Story was hidden beneath the Medici Chapel in Florence for Centuries!
Researchers recently discovered a trapdoor behind a wooden cupboard inside the Chapel, and that trapdoor took them to a room in the basement. One can find such secret rooms in old buildings. However, the real surprise was there inside the wall, under the layers of plaster.

A magazine has published an article on this discovery according to which the researchers noticed that the floor was much older than the finishing plaster on the wall! It means the wall was repaired (?) many years after the construction of the room. In the past, researchers had discovered ancient artefacts by removing the then existing plaster on the walls. To remove it carefully is a laborious and time-consuming process. The researchers were stunned after completing the process, as they found an unknown work by Michelangelo di Lodovico Buonarroti Simoni on the original wall!

The great Italian sculptor, painter, architect and poet of the High Renaissance (March 6, 1475 – February 18, 1564) had created a number of artworks for the Medici Royal Family. One can find many of his artworks on the ceiling of the Sistine Chapel in Vatican City. However, some experts are not ready to accept that these sketches or pictographs are works by famous Renaissance-era artists. They argue that these works, without any signature, were created by low-profile artists. Others believe that the style of each of the great artists, like Michelangelo, is unique. So, critics can identify works by Leonardo da Vinci, Botticelli or Michelangelo with relative ease. 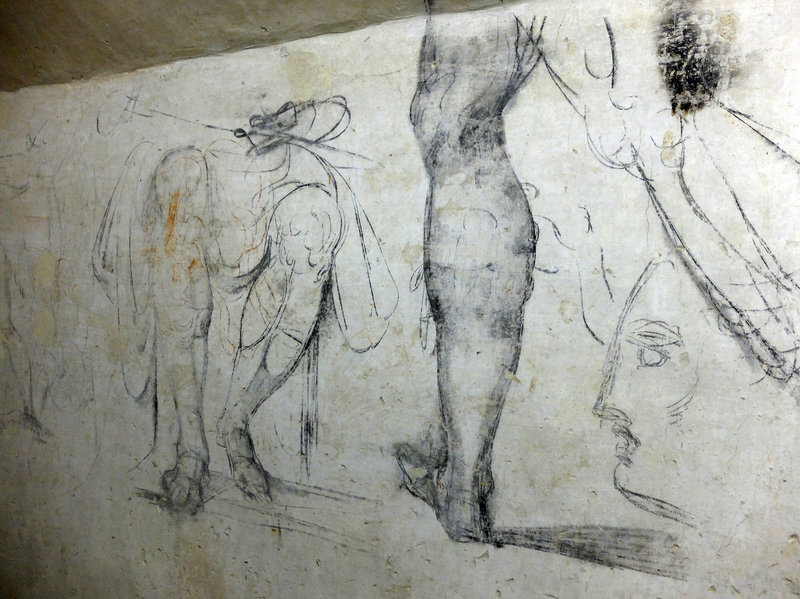 There are some 60 to 70 different sketches on the walls of the hidden room. Art historians do not believe all the drawings are the work of Michelangelo.

After monitoring the strokes in the sketch found on the wall of Medici Chapel, experts came to the conclusion that it was the work of the person who decorated the ceiling of Sistine Chapel with his works. The sketch closely matches with Apollo-David, a 1.46mt unfinished marble sculpture by Michelangelo that dates from approximately 1530. Moreover, the age of the sketch coincides with Michelangelo’s lifespan!
The concerned authorities plan to open the Secret Michelangelo Room to the public in 2020…