She has become the symbol of Climate Change Movement. Now, stalwart statesmen follow her path. However, people used to make fun of Swedish teenager Greta Thunberg because of her illness in the past! Recently, she has opened up about her Asperger Syndrome…
As per a report prepared in 2013, Asperger Syndrome is just like Autism. The syndrome is named after the Austrian paediatrician Hans Asperger, who claimed in 1944 that children, who lacked nonverbal communication skills, had limited understanding of others’ feelings, and were physically clumsy!
Greta has this syndrome! On Twitter, the teenage girl recently wrote that she had no friends before she started the Climate Change Movement. She tweeted: “Before I started school striking I had no energy, no friends, and I didn’t speak to anyone. I just sat alone at home, with an eating disorder.” 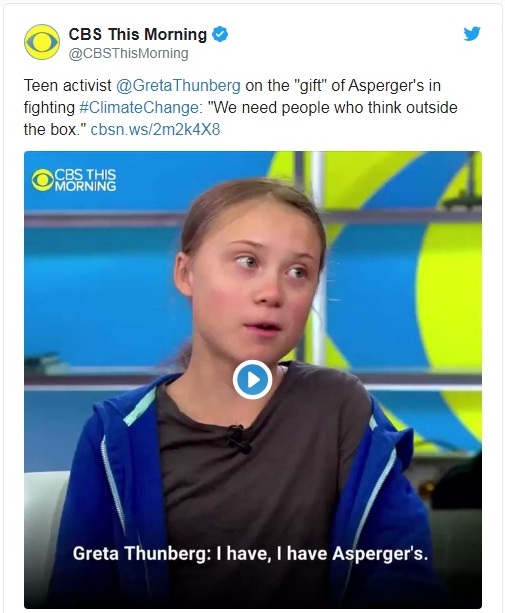 Greta admitted that she had detached herself from the world, stressing: “I’m not public about my diagnosis to ‘hide’ behind it, but because I know many ignorant people still see it as an ‘illness’, or something negative. And believe me, my diagnosis has limited me before.”
Meanwhile, Greta declared that she managed to overcome the problem. “When haters go after your looks and differences, it means they have nowhere left to go. And then you know you’re winning! I have Asperger’s syndrome and that means I’m sometimes a bit different from the norm. And ‘given the right circumstances’, being different is a superpower,” she added.

Anthony John Attwood, the British psychologist famous for his work on Asperger Syndrome, is of the opinion that those, who manifest this syndrome, are usually outspoken… they are honest persons… they issue a clear statement about what is right and what is wrong!
It is to be noted that Australian columnist Andrew Bolt recently made controversial comments on Greta’s trip to the Atlantic Ocean onboard a solar boat. He repeatedly attacked the girl, stating that she was mentally ill. Bolt also wrote that Greta had major problems. It seems that the Swedish girl gave a fitting reply to her critics, like Bolt, through the Social Media. Indeed, being different is a superpower and one should admire that power!