How Many Deaths Will It Take, Till You Know…

Terrorism, yet again, has rocked the world! After New Zealand, it’s Sri Lanka’s turn to experience the gruesome and brutal terror attacks! The world has experienced a number of terror attacks in the 21st Century. However, what happened in the tiny South Asian island nation on Easter Sunday was unprecedented. A series of bomb blasts struck churches and luxury hotels across the country early on April 21, and the co-ordinated attacks claimed at least 359 lives! Observers and researchers believe that the recent terror attacks in Sri Lanka were, reportedly, of a brand new category…
Although the Sri Lankan government is yet to confirm as to who had triggered the terror attacks, the Police have arrested a number of people for their alleged involvement in the acts of terror. Top Sri Lankan investigators are of the opinion that the culprits have close contacts with foreign Islamic outfits! Majority of the victims were Sri Lankan nationals, but many foreigners were also killed in the serial blasts. According to intelligence officers, the terrorists planted bombs in big hotels mainly to target foreign guests (that too on Easter Sunday!). It is to be noted that Australian national Brentong Harrison Tarrant had shot dead 50 people at two mosques in Christchurch (New Zealand) in March… and in Sri Lanka, the terrorists targeted mainly the churches. On April 22, Sri Lankan Minister of State for Defence Ruwan Wijewardene claimed that The Easter Sunday massacre was carried out as revenge for the shootings in Christchurch. Next day, the ISIS backed Wijewardene’s statement, claiming that bombings in the South Asian nation were as a revenge for the mosque shooting in New Zealand!

It means that the world has become a stage for these heinous acts of terrorism and counter-terrorism… And, bloodthirsty people, taking control of this stage, are planning to rule the roost! They, seemingly, are in a competition to prove once again that the greatest enemies of human beings are human beings themselves! A section of people opines that despite experiencing terror attacks, the modern world has learnt how to protect the human race! Perhaps, these people fail to realise that the mortality of modern men should not be judged on the basis of ‘numbers’, but on ‘suddenness’ or ‘unexpectedness’!
One eight-year-old girl had arrived in Sri Lanka to enjoy holidays… All on a sudden, her body turned into a bloody lump in front of the eyes of her hapless parents. This incident helps us realise the ‘futility of life’ in the modern world. 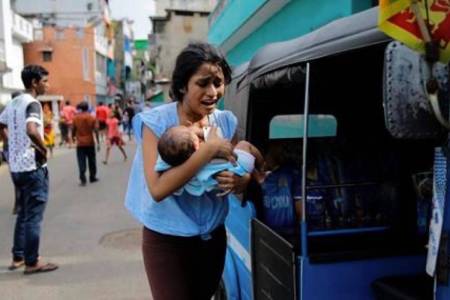 Canadians in Sri Lanka told to use extreme caution after bombings

The Intelligence Department had reportedly warned the Sri Lankan government well in advance that terrorists might target the churches. However, the world knows how difficult it is for a government to foil the sudden attacks launched by an invisible enemy.
Somehow, Sri Lanka had managed to restore peace after decades-long bloody ethnic (civil) war. Tamil guerrillas, rebel Buddhists, anti-government protesters and the government forces, too, had paralysed the nation in the past. President Maithripala Sirisena and the Supreme Court recently got involved in a dispute over the Presidential Election there. Still, politics did not ruin the civil society! The visible changes in the case of Sri Lanka was being acknowledged widely as a major international development. 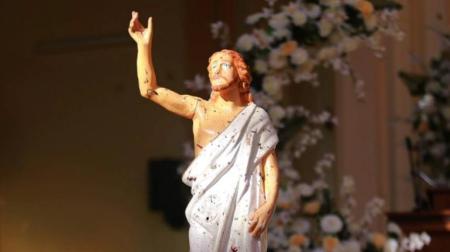 However, the terror attacks rocked the nation. Prime Minister Ranil Wickremesinghe rightly asserted that “the terrorists do not belong to any faith and they have their own interpretation of faith”, stressing: “The government will continue its policy of having unity in the country while cracking down on global terrorism.”
PM Wickremesinghe is a wise politician. However, other Sri Lankan leaders would have to understand the fact that Nationalism, based on muscle power cannot safeguard the island nation! Apart from fighting against terrorism, the Sri Lankan government will have to overcome the social problems triggered by the Sinhalese Nationalism, which not only had claimed thousands of Tamil lives in the past, but also had spread (ethnic) hatred! Colombo cannot afford to commit the same mistake, once again! Right now, the entire world, after weeping, is with Sri Lanka and its people in spirit…