It Is Difficult Not To Sigh

Well, it has tolerated so many things in the last 856 years, including wars, unfavourable weather condition, pollution … It also became a victim of changing style of architecture. It had lost the top of its metallic minaret in 1786, before getting it back after (the commencement of) reconstruction works… The Notre Dame Cathedral stood tall in Paris after absorbing various shocks… French Revolution, Napoleon, Second World War, Hitler!
According to historians, it was unfortunate that Notre Dame had to tolerate renovation during King Louis XIV’s rule (1643-1715). Normal windows not only replaced beautiful glass windows, but the concerned authorities also destroyed a pillar so that horse-drawn carriages could enter the Cathedral premises! The situation worsened during the French Revolution, as the revolutionaries destroyed a number of statues there! The Bishop’s Palace was completely gutted in a fire, and Notre Dame never got it back. Although the Catholic Church got the ownership of Cathedral in 1802, the condition of Notre Dame was never the same (as before)…

Noted poet, novelist and dramatist of the Romantic Movement Victor Marie Hugo published his French Gothic novel ‘The Hunchback of Notre Dame’ in 1831. Through the novel, Hugo introduced the world to the bell player of the Cathedral, Quasimodo, who was born with a hunchback, and was feared by the townspeople as a sort of monster, but he found sanctuary in an unlikely love that was fulfilled only in death. The author also introduced his readers to beautiful Esmeralda, a 16-year-old French Roma girl, who constantly attracted men with her seductive dances, and was rarely seen without her clever goat ‘Djali’. She had a kind and generous heart. Surprisingly, Notre Dame emerged as the hero of the novel, surpassing the love story of Quasimodo and Esmeralda. Hugo described the beauty of Notre Dame Cathedral in two chapters. The novel is set in the 1400s, when the Cathedral was still in its glory days. Hugo wrote: “It is difficult not to sigh, not to wax indignant, before the numberless degradations and mutilations which time and men have both caused the venerable monument to suffer.”

Since the publication of The Hunchback of Notre Dame, more than a dozen movies have been made on this novel. After a massive fire that broke out at the Cathedral of Notre Dame and destroyed its spire and severely damaged its roof on April 15 (2019), Professor Emeritus of application Medieval Art History at Columbia University Stephen Murray said: “In the Middle Ages, you would’ve believed that God sent the fire because God wanted a better Cathedral. But you can’t hope for a better Cathedral at this point.” He also said: “The question is how on earth are we going to find the resources to rebuild this one?”

The fire that had raged through the Cathedral, causing its central spire to collapse, has a great impact on the social media. The image of Quasimodo, the famous resident of this Cathedral created by Disney in 1996, went viral on Instagram immediately after the accident. The image shows that Quasimodo, with tearful eyes, grabs the Cathedral (which is on fire) with both of his hands. Someone posted the image with the caption: “Today he cries. It was a part of the childhood of a lot of people around the world.” 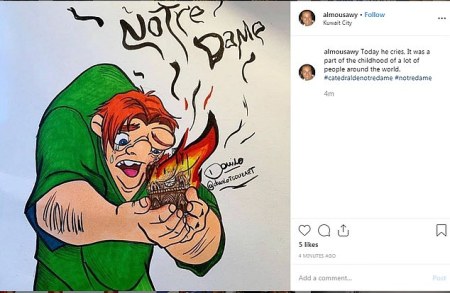 Many recalled Richard Linklater’s 2004 film ‘Before Sunset’ after the recent accident. The story revolves around Jesse and Celine, the two reunited ex-lovers, who spend part of the day together in Paris. In one scene, as the couple is on a boat on the Seine, Celine tells Jesse: “But you have to think that Notre Dame will be gone one day.” No one could imagine that a dialogue of the film would haunt Paris 15 years later! A twitterati wrote: “Notre Dame will be gone one day. That one day came too fast to #Paris…” Another twitterati Ian Dunt posted: “Don’t want to break anyone’s heart, but this is the clip I always think of when someone mentions Notre Dame.” A third user said: “Thanks to Twitter on the tragic occasion for reminding me of this scene from Before Sunset. As Notre Dame is engulfed in flame it’s worth remembering that all physical beauty is fleeting. Enjoy it while it’s there & remember it after it’s gone.”…
French President Emmanuel Macron has vowed to make the devastated Cathedral more beautiful than before in a span of five years. However, experts have warned that the work could take decades. Now comes the pertinent question: Who shall rebuild the Cathedral?

“Great edifices, like great mountains, are the work of centuries… Time is the architect, the nation is the builder,” wrote Hugo in his The Hunchback of Notre Dame (Book Three, Chapter I). For him, the Cathedral was a work of art authored by humanity itself. He used to believe that Notre Dame was created by humanity, as it had no single creator. At the end of the preface of the novel, Hugo said: “The church will, perhaps, itself soon disappear from the face of the earth.” Although it is possible for a similar rebirth to happen again, the global community is silently remembering this prediction by Hugo, made about 188 years ago…