A group of women originally from Pakistan staged protests in Srinagar in February 2019, demanding the requisite papers to visit their mothers and relatives in Pakistan. These women, with their children and husbands, had come to Kashmir after 2010. In 2010, the National Conference government in the northern Indian province of Jammu and Kashmir had announced a Surrender & Rehabilitation Policy for the local youths, who had crossed the Line of Control for arms training.
However, they later settled to normal lifestyles after marrying the local girls or young ladies there. Only the dependents of those who had gone to Pakistan-occupied-Kashmir (PoK) and Pakistan between January 1, 1989 and December 31, 2009 were eligible for such considerations.

In 2017, the then Provincial Government had announced in the Assembly that only 377 former militants, along with 804 family members, had returned from Pakistan via Nepal and Bangladesh (since 2016).
Those, who returned, claimed that neither did they get proper rehabilitation, nor Province-Subject Certificates. Their wives are now struggling to obtain the documents necessary to allow them to visit Pakistan to meet their ailing relatives. 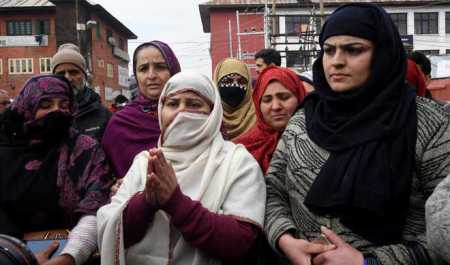 Spouses – belonging to foreign lands – generally get/obtain Indian Citizenship after staying in India continuously… and these are ordinary women, who want to visit their relatives residing in a country that is now foreign to them on different occasions (The Indian Express, March 2019).
The External Affairs Minister of India, Sushma Swaraj, has always tried to help Indian women in distress… the question now arises out of her silence as regards to the demands of these women – wives (of a non-Indian origin) of the erstwhile militants in Kashmir. 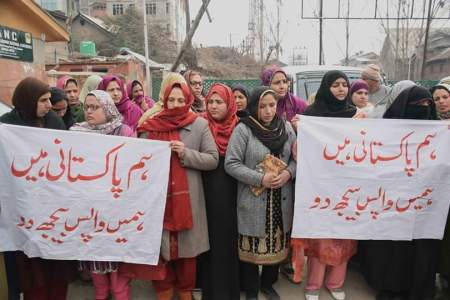 Instead of understanding and considering the cause of the Pakistani wives of the ex-militants (as per the J&K Government Policy on March 18), Vinod Chatterji Kaul, the Principal Sessions Judge of Jammu, sentenced Faiza Begum to three years of imprisonment, and fined INR 10,000 for violating the provisions of Section 14A of Foreigners Amendment Act of 2004. She was sentenced with imprisonment for further two years and fined INR 10,000 more under the provisions of Passport Act (1967) for entering India without a valid passport. The judge acquitted Sheraz for want of evidence (Indian Express, March 20, 2019). Sheraz Ahmed had married Faiza Begum in 2005 in PoK and the couple had traveled to Kashmir via Nepal, with three minor children, in 2012.

Boundless Ocean of Politics has received this article from Indian Radical Humanist Association (IRHA). The IRHA published this article in its newsletter in March 2019.