It – seemingly – has become difficult for them to tolerate the rising temperature. With the ice melting because of global warming, they are now trying to find new shelters. Some of them recently visited local colonies in search of comfort. As a result, the civilised society has become worried!
Novaya Zemlya (or Nova Zembla) is an archipelago in the Arctic Ocean in northern Russia where around 3,000 people live. The local administration recently declared an Emergency there, saying in a statement that a mass invasion of polar bears was terrorizing an island town! “There’s never been such a mass invasion of polar bears. They have literally been chasing people,” stressed Zhigansha Musin, the head of the local administration. The senior official also said that they made the move after the residents of the town had appealed for help! 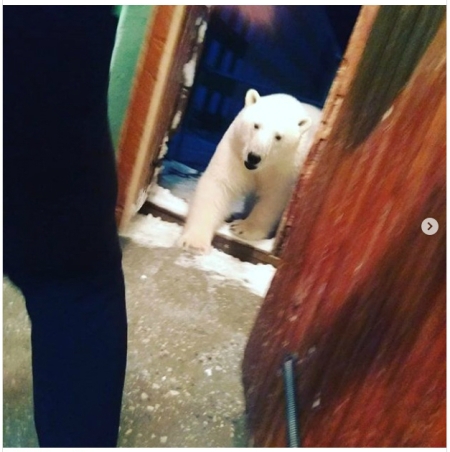 For his part, the region’s Deputy Head Alexander Minayev said: “People are scared, and are afraid to leave their homes. The parents are unwilling to let their children go to school or nursery.” Meanwhile, Minayev clarified that the Russian administration was yet to allow the environmental authorities to shoot the bears as hunting of the endangered species is strictly prohibited in the country. Instead, the concerned authorities have sent a team of specialists to the remote Arctic region in order to sedate and remove the hungry polar bears that besieged the local people!
Since December, 52 polar bears have practically invaded the city. Musin, who has been living in Novaya Zemlya since 1983, insisted that polar bears usually avoid residential areas. However, situations arising out of the global warming – seemingly have prompted them to invade those areas. “They are feeding on rubbish at a local dump. Attempts to scare off those polar bears using car horns and dogs have all failed,” he added. 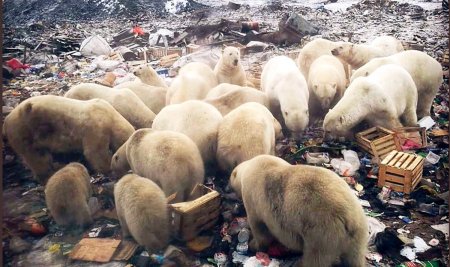 Polar bears on a rubbish dump in Novaya Zemlya, Siberia

Environmentalists have expressed serious concern over the scenario, saying that the impact of global warming on Arctic region makes polar bears vulnerable. A widespread scarcity of food due to melting ice has forced the species to invade residential areas. Now, the environmentalists are trying hard to control the movements of polar bears and to bring them back to normal life.