The Pakistani economy is in dire straits…..
After becoming the 22nd Prime Minister of Pakistan on August 18, 2018, Imran Khan hinted that his government would adopt the Chinese model in order to boost the economy. However, some members of his Cabinet expressed serious concern over the ‘Chinese aggression’ and advised the PM to reconsider his plan. Imran has seemingly very less liability for this situation, but the responsibility lies on his shoulders now.
During his trip to Beijing in 2013, then Prime Minister Nawaz Sharif had said that the relation between the two countries “is higher than the Himalayas and deeper than the deepest sea in the world, and sweeter than honey“. A couple of years later (in 2015), Chinese President Xi Jinping visited Islamabad to strengthen the sweet diplomatic relations. In the Pakistani capital, President Xi announced that China would invest a huge amount of money in the South Asian nation mainly to develop infrastructure projects. The Chinese leader’s visit was aimed at inviting Pakistan to join the ‘One Belt, One Road‘ (OBOR) project – a Chinese foreign policy and economic strategy to build trade routes between China and the countries in Central Asia, Europe, Africa and Indo-Pacific littoral countries. As per the original plan, the road from China will reach Pakistan’s Gwadar port via Islamabad and Peshawar. Beijing called this particular section of the proposed road ‘China-Pakistan Economic Corridor’ (CPEC) in order to allow the bilateral friendship to secure its place in the global economy! However, experts believe that ‘the road of friendship’ has triggered Pakistan’s fall into the Chinese debt trap!

Experts and economists are of the opinion that the top political leadership in Beijing have purposefully used the OBOR project to destroy the Pakistani economy. The Chinese leadership is well aware of the fact that the Asian giant will become stronger (politically, economically and militarily), if it manages to connect three continents through this road. As per the Chinese plan, the CPEC section of the road will connect the western part of China to the Arabian Sea, allowing the Asian powerhouse to use the sea routes for trade. So, China will enjoy the maximum gain from this project. And surprisingly, Islamabad has received financial support for implementing this project from Beijing as a loan and invited the Chinese companies for constructing the CPEC! It means that the money is going back to Beijing and Islamabad is falling into the debt trap. Most importantly, the Chinese companies are supplying the required technology to Pakistan. So, China will leave nothing for Pakistan after the completion of the project! The concerned authorities in Islamabad have realised that they can’t get the opportunity to re-use the technology in future projects.
Talking to the Financial Times, Commerce Minister of Pakistan Abdul Razak Dawood has said: “The previous government did a bad job negotiating with China on CPEC – they didn’t do their homework correctly and didn’t negotiate correctly so they gave away a lot.”

Asia Times, too, reported that Pakistan has seen an exorbitant increase in CPEC-related imports in the last couple of years due to purchase of thermal power machinery from abroad. This caused a widening of the current account deficit (nearly 50%). Now, Pakistan’s foreign currency reserves are almost empty. As of October 12, 2018, the reserves stood at just USD 14.85 billion. Prime Minister Imran has admitted that the country will be able to import necessary goods for only two months with this money. And then, the future will become uncertain. Imran further claimed that Pakistan’s debt was PKR 6,000 billion in 2008 that ballooned to PKR 30,000 billion in 2018.
Islamabad is also facing a huge trade deficit. On October 11, the Daily Times reported that “Pakistan’s trade deficit in first quarter of current fiscal slightly fell to USD 8.86 billion from the USD 9.01 billion reported in corresponding period of last fiscal”. Meanwhile, the Pakistan Bureau of Statistics (PBS) reported that “the overall trade deficit contracted by 1.61% in July-September 2018 period of 2018-19 Fiscal Year (FY19) as compared to the corresponding period of FY18.” In a statement, the PBS also said: “The overall exports in first three months of FY19 increased by 4.56% to USD 5.39 billion as compared to USD 5.15 billion worth of goods exported in corresponding period of previous fiscal year. Imports in first three months of FY19 went marginally up by 0.63% to USD 14.2 billion as against USD 14.17 billion in the corresponding period of FY18.”
During the election campaign, Imran had presented himself as the man to break the country’s addiction to hand-outs from the West, saying that his government, unlike the previous governments, would not beg to the International Monetary Fund (IMF) for funds. However, the Pakistani officials met IMF representatives in the second week of October in Bali to formally request Islamabad’s 13th bailout since the late 1980s. The Pakistani officials stressed that the IMF could give their economy a breathing room.

Commenting on the issue, an expert – who wished to remain anonymous – said: “The path to Medina is full of thorns, not roses.” He explained that the IMF could impose some conditions, even if it agreed to bailout the Pak economy. In that case, Islamabad would have to privatise a number of state-run organisations and a number of people would lose their jobs! Even the PM is well aware of the fact that any reforms prescribed by the IMF would threaten his lofty campaign promises, like his vow to create 10 million jobs. Creating 10 million jobs would require the economy to grow at 8%, but that can only be achieved with economic shock therapy, which – in the short term – will smother growth to far below the 5.8% achieved in the last financial year. On October 15, Pakistan’s stocks slid by more than 3% in early trading before a slight recovery after the new government sought a bailout from the IMF to bridge the ballooning current account deficit.
Furthermore, the global lender would expect full transparency from Pakistan, if it provides financial help. In that case, Islamabad would have to provide the details of the CPEC project to the IMF and China would never allow Pakistan to do so! After considering the scenario, the Pakistani government has decreased the amount of allocated funds for the CPEC project. Pakistani Railway Minister Sheikh Rasheed Ahmed recently confirmed that the share of the CPEC in the railways has been reduced from USD 8.2 billion to USD 6.2 billion. “Pakistan is a poor country that cannot afford huge burden of the loans. Therefore, we have reduced the loan from China under the CPEC for rail projects from USD 8.2 billion to USD 6.2 billion. The CPEC is like the backbone for Pakistan, but our eyes and ears are open,” insisted the minister. 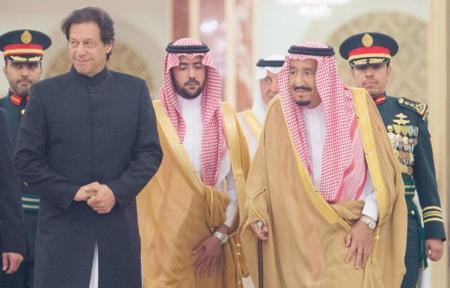 Prime Minister Imran recently visited Riyadh to attract Saudi investments. Although the visiting premier managed to secure USD 6 billion loan from Saudi Arabia, Riyadh informed Imran that it wanted to set up an oil refinery at Gwadar port. Imran had no other option, but to accept the Saudi request, despite the fact that China doesn’t want the West Asian nation (and a friend of the US) to use the CPEC project.
It is to be noted that Pakistan is not the only country that falls into the Chinese debt trap, as many countries – including Sri Lanka, Malaysia, Tonga and Vanuatu – have experienced the same in recent years. This is basically a part of the Chinese foreign policy. According to experts, the ‘Debt Diplomacy‘ has helped President Xi increase China’s influence in different parts of the globe. And no wonder, Pakistan has fallen into the same trap.

Perhaps, it would not be right to blame Imran Khan for this. The political and economic situation in Pakistan (in the last few decades) has prompted the nation to fall into the trap. Historically, the US was Pakistan’s ‘best friend’. However, the Pak-US ties deteriorated due to post-al Qaeda US administration’s decision to take a tough stand on the issue of terrorism. The US’ decision to stop providing financial aid to Pakistan hit the bilateral ties hard. At the same time, Washington is also trying to find a new ‘friend’ in the Indian Subcontinent to counter China’s growing influence in Asia. Meanwhile, a change in the Indian foreign policy has brought New Delhi closer to Washington. Now, Pakistan is not the ‘only’ friend of the US in the Subcontinent. The changing geopolitical landscape in South Asia has also badly affected the Indo-Pak ties. And China has utilised this opportunity to become an ‘all weather friend’ of Pakistan. However, the top political leadership in Islamabad has failed to realise that Beijing, in the veil of friendship, prepared a trap for Pakistan!
Now, the Imran Khan government is facing a difficult challenge: to get the Pakistani economy out of trouble without disturbing the regional political (or diplomatic) equation! It is up to Imran to overcome the challenge. Right now, he is in Beijing and China has promised USD 6 billion aid to Pakistan…