Russian President Vladimir Putin is all set to visit India, as the two countries plan to sign an agreement for New Delhi’s purchase of the multi-billion dollar S-400 Triumf missile defence system. However, the US has warned India of sanctions over the missile defence deal with Russia ahead of President Putin’s arrival in the South Asian country.
The Donald Trump administration has said in a statement that Washington considers the deal as a significant transactions and hinted that India could come under sanctions, if it continued with big ticket Russian arms purchases. It is to be noted that the US has already imposed sanctions on the Chinese military’s Equipment Development Department and its Director Li Shangfu for purchasing the Su-35 combat aircraft and a S-400 surface-to-air-missile system from Moscow. It was the first time when Washington used the CATSA (Countering America’s Adversaries Through Sanctions Act) against a third party (China) in order to punish Russia for occupying Crimea. 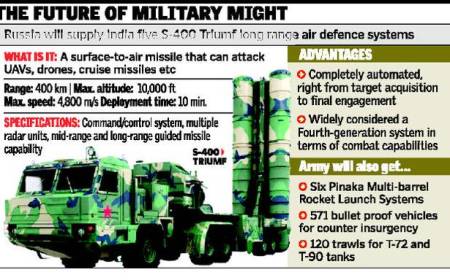 Speaking at a press conference in Washington last week, a senior US official said: “They are instead aimed at imposing costs upon Russia in response to its malign activities.” He also said: “As to other potential recipients of the S-400, we haven’t made any determinations yet with respect to what to do about those, but you can be confident that we have spent an enormous amount of time talking about prospective purchases of things such as S-400s and Sukhois with people all around the world who may have been interested in such things and some who may still be.”
As expected, such statements (issued by a senior US official) put India under tremendous diplomatic pressure. According to sources close to the Indian Ministry of External Affairs, if the US takes such an action against a global power, like China, then India will definitely be in trouble in the coming days. During the recent ‘2+2’ summit, the Indian external affairs minister and the defence minister informed their US counterparts that New Delhi needed the Russian missile defence system to counter China and Pakistan’s growing influence in West Asia. They also informed the senior US officials that the situation was different when India started holding talks on this particular deal.

The Russian President & the Indian PM

Although it’s still not clear whether India will have the guts to ignore the US warning, neighbouring China has protested US sanctions imposed on its military over the purchase of Russian fighter jets and missiles. Reports suggest that Deputy Foreign Minister of China Zheng Zeguang summoned US Ambassador Terry Branstad and “lodged solemn representations” in relation to the sanctions. The Chinese state media reported that Beijing strongly urged Washington to cancel the sanctions or “bear the consequences”.
Now, it’s India’s turn to tell the US to respect the international law and not to dictate terms in a multi-polar world. The time has come for Russia, China and India to move together!