Once upon a time, it was a lovely & lively place to dwell in. With sporting casinos, schools, hospitals and factories, the desert city of Namibia used to bustle with activities every day. All those are still there… but, covered in darkness, as ghosts have started inhabiting the town instead of the human beings! There is a story or history behind this change in Kolmanskop…
In the year 1908, the driest nation in Sub-Saharan Africa was under the German rule. A person, Zacharias Lewala, was trying to clean the railway track that was laid some time ago… while removing sand from the railway track, he noticed a stone-like bright object. As Lewala had no idea about the object, he handed it over to his superviser August Stauch, saying: “Look, Mister, moy Klip (beautiful stone).” Stauch sent the object to the analysis at Swakopmund immediately. It was a Diamond! Later, he secured a claim in the area, and reportedly earned a fortune! 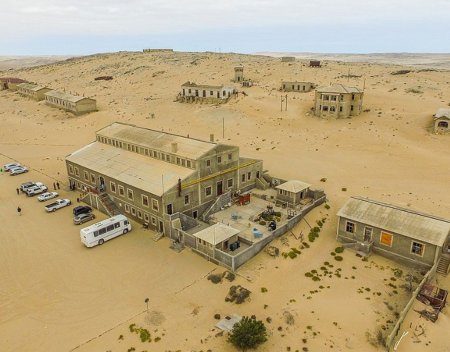 Zora del Buono wrote in an article published in the German news magazine der Spiegel: “Lewala’s name entered history but not much more, the man had nothing of his find, no one paid him for it or showed any kind of gratitude, others made the big business and they made it quick.”
The discovery of diamond enabled Kolmanskop be famous overnight! Companies engaged in digging and excavations started setting up their offices in Kolmanskop. Within three to four years, the Germans had declared the town a restricted area, and allowed a Berlin-based company to control Kolmanskop. The local residents had no other option, but to leave the city and to start living in the nearby areas. Gradually, Kolmanskop became a popular desert town. Various factories were set up there, as Kolmanskop started having post offices, bakeries, schools and casinos…

However, the happy days did not last for long! Because of excessive mining and excavations, the quantity of diamonds got from the region started deceasing, that too, fast!Another diamond mine was discovered near the banks of the Orange River, just 270km south of Kolmanskop, in 1928! The Excavation Companies immediately left Kolmanskop for the new region. Even the local residents moved southwards, leaving their lands. According to historians, Kolmanskop became a completely abandoned city by 1956. Gradually, darkness covered the lively city, and it started experiencing sandstorms…

Now, this Namibian desert city has become a famous Tourist Spot! Kolmanskop welcomes 35,000 tourists every year on an average, taking photographs of those abandoned houses covered by sands, among other things. This desert city, once famous for diamonds, has got a new identity: Ghost City! People do not find those glittering objects there… still, the lonely city now enthralls many visitors, in another fashion!