Since the Time of the Romans, dogs have been very popular pets in Britain. The history of keeping dogs as pets in Britain is deeply rooted in this animal’s apparent loyalty to the King and the Queen. The dogs not only served as the Royal guards, but also accompanied members of the Royal Family during hunting in the past! The Royal Dogs arrived in Britain mainly from Germany, Russia, China, India and other former British colonies…

King Charles I had ruled Britain from 1625 to 1649. During his reign, the Spaniel had become the most popular dog breed in the Western European nation. The Britons used to call the animal ‘Cavalier King Charles Spaniel‘! King Charles II (May 29, 1630 – February 6, 1685), too, was a dog-lover… he reportedly had written a decree that the ‘King Charles Spaniel‘ should be accepted in any public place, even in the Houses of Parliament!

The year 1833, when Princess Victoria was just 14, her mother Marie Louise Victoria or Princess Victoria of Saxe-Coburg-Saalfeld (August 17, 1786 – March 16, 1861) – later Duchess of Kent and Strathearn – received a three-year-old Spaniel as a gift from one of her friends. She named the dog ‘Dash‘, who became a companion of the little princess. Princess Victoria used to take Dash with her everywhere she visited.

It was June 28, 1838, when Victoria inherited the throne at the age of 18. Immediately after her accession, the Queen had come to Dash to take care of the animal. In contemporary Britain, Sir Edwin Henry Landseer (March 7, 1802 – October 1, 1873) was a famous animal painter. Once, he had painted an image of Dash with the Queen. Later, Queen Victoria appointed Sir Edwin as the ‘Royal Painter‘ and requested him to re-create the images of other beautiful animals. The collection of Sir Edwin’s works is called ‘Her Majesty’s Favourite Pets‘!

Queen Victoria tied the nuptial knot with Prince Albert of Saxe-Coburg and Gotha or Francis Albert Augustus Charles Emmanuel (August 26, 1819 – December 14, 1861) on February 10, 1840 at the Chapel Royal, St James’ Palace. Prince Albert, too, was an animal lover. When he arrived in Britain from Germany to marry the Queen, he brought his favourite Greyhound bitch, ‘Eos‘! Even, Eos accompanied the Royal Couple during their honeymoon! Sir Edwin also painted an image of Eos that the Queen presented her husband as a Christmas gift. The Queen reportedly set up a Royal Kennel at Windsor Home Park to keep more than 100 dogs.

A Pekinnese dog from China also found its place at the Royal Kennel. At the end of Second Opium War (also known as the Second Anglo-Chinese War or the Anglo-French expedition to China that lasted from 1856 to 1860), the British and French forces took control of Beijing on October 6, 1861. The joint forces had burnt down the Summer Palace of the Qing Dynasty. However, the soldiers rescued five Pekinnese puppies from the Palace and handed one of them over to Queen Victoria. The Queen used to call the dog ‘Looty‘. No wonder, Looty received a royal treatment in Britain.

The British Queen also had some Collie dogs from Scotland in her Royal Kennel. Two of them – ‘Sharp‘ and ‘Noble‘ – were the Queen’s favourite! Five years after Prince Albert’s demise, two-year-old Sharp entered into the Royal Palace and became Queen Victoria’s companion. When the Queen used to visit the Balmoral Castle for vacation, she took Sharp with her. After Sharp’s death in 1879, the Queen installed a beautiful sculpture of the dog on its tomb in Windsor. 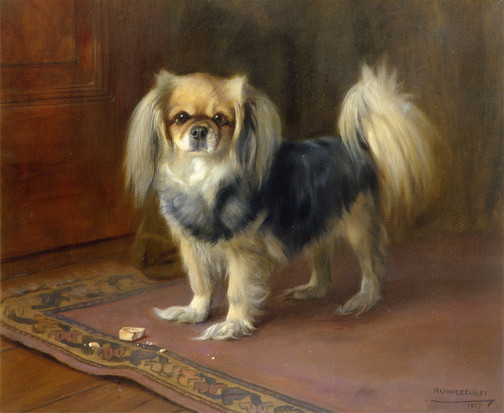 Noble was comparatively calm and cool. He always kept a close eye on the Queen’s gloves. Noble, too, accompanied Queen Victoria to Balmoral quite a few times. In fact, the Queen’s favourite collie died there on September 18, 1887 at the age of 18. One can find Noble’s tomb at the garden situated in the western side of Balmoral Castle. There is also a bronze statue of Noble on the tomb!

In Britain, there was another royal dog, called ‘Caesar‘! After the death of Queen Victoria, her eldest son and second child Edward VII became the King (on January 22, 1901). Edward VII was also an animal-lover, as his favourite dog was ‘Jack‘. When Jack died in 1902, a Nobleman gifted a Wire Fox Terrier to the King… and the King called it Caesar. He also appointed an official to take care of Caesar. King Edward VII used a scepter, with precious gemstones studded in it, on which Caesar’s face was painted. Even, the dog used to sleep near the King’s bed at night. On Caesar’s neck collar, one could find the words: “I am Caesar, I belong to the King.”

Once, King Edward VII had ordered a wax statue of his beloved Caesar. However, the King passed away before the Royal Palace got the statue. His master’s death shocked Caesar, too, as he refused to eat, and would spend time whining outside the King’s bedroom. The Royal officials, once, found the dog hiding under his bed. Queen Alexandra encouraged the dog to eat… however, the dog refused. Caesar also attended the funeral of Edward VII, as he led the funeral procession with a highlander walking behind the carriage that was carrying the King’s coffin. He was placed ahead of the Heads of State in the procession, including King George V and eight other Kings, an act that was disapproved by Kaiser Wilhelm II of the German Empire.

After the King’s demise, Caesar used to stay at Marlborough House in London with Queen Alexandra. The dog died, following an operation on April 18, 1914. Later, Caesar was included in the sculpture of the King and Queen atop their tombs in St George’s Chapel, Windsor Castle. Caesar lies at the feet of the King in the sculpture.

All these dogs have become parts of the Royal Collection…