The democratic nations across the globe are seemingly encountering a new form of addiction – Just Stay in Power!
Rulers in those countries are trying hard to stay in power by any means, without disturbing the existing Constitutional rules and regulations. Israel has reached a new level in this global competition as Prime Minister Benjamin Netanyahu has started making various moves only to enjoy power. The PM recently hinted that his party would make a pre-poll alliance with racist, reprehensible and ultra-nationalist Otzma Yehudit Party. Even, the conservative parties in Israel have always avoided the Otzma Yehudit Party. However, their history doesn’t seemingly bother PM Netanyahu because he is determined to stay in Power!

For the Israeli PM, it is important to join hands with the ultra-nationalists, because he probably wants to secure the support of the smaller section of people, too. According to political analysts, the Israeli premier has realised that it is not possible for him to secure the Leftist support. And Netanyahu will create history as the longest serving Israeli PM, if he manages to win the General Elections, to be held in April.
It’s a different question altogether whether history will be created with a dangerous move! Members of the Otzma Yehudit Party believe that the Palestinians should be forced to leave Palestine, and Israel should take full control of the Palestinian lands. This party wants to capture Temple Mount through military operations. Otzma Yehudit is also ready to declare a ‘War against Islam’ in order to protect the ‘Homeland of the Jews’! Perhaps, PM Netanyahu has no other option but to follow the Otzma’s path to fulfil his personal dream. 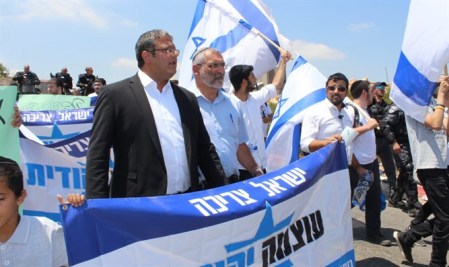 The progressive Jewish lobby has openly condemned PM Netanyahu’s decision, saying that it’s the worst possible political alliance in Israel… Surprisingly, those – who are not so progressive – have also expressed serious concern over the latest development. The Jews, living in the US, too, are against such an alliance, as they believe that Netanyahu’s move will destroy the principle of the Israeli State. Jews in Europe are no exception here, as they have strongly opposed the Israeli PM’s move.
No one knows what is going on in Netanyahu’s mind. However, it’s for sure that Israel will lose many international friends if Netanyahu retains power with the support of Otzma. The PM should know that he will never attain (Israel’s) goal without global support. However, the addiction of power is quite an addiction! It seems that Netanyahu is hell-bent on forgetting everything, deciding to follow the path of some of his foreign friends…