The Recent Feathers & The Fairer Sex

Gita Gopinath – an Indian-American economist and a Harvard Professor of International Studies and Economics – has been appointed as Chief Economist at the International Monetary Fund (IMF)!
Gita, who is all set to become the first woman to hold the position, will be the second chief economist at the IMF with an Indian root after Dr Raghuram Rajan (2003-06), the former Governor of Reserve Bank of India.
The 46-year-old Gita will replace Maurice Moses Maury Obstfeld in December. IMF Managing Director Christine Lagarde has confirmed the news, saying in a statement: “Gita is one of the world’s outstanding economists, with impeccable academic credentials, a proven track record of intellectual leadership and extensive international experience.” She added: “All this makes her exceptionally well-placed to lead our research department at this important juncture.” After the appointment of Gita, the chief economists of all the three major organisations – the IMF, the World Bank and Organisation for Economic Co-operation and Development (OECD) – will be women.

Born (on December 8, 1971) in southern Indian city of Mysore, Gita did her BA from the University of Delhi (1992) and Masters (in Economics) from Delhi School of Economics. She once again completed her MA from the University of Washington (1996) and Ph.D from Princeton University (2001). She was named one of the top 25 economists under 45 by the IMF in 2014 and was chosen as a Young Global Leader by the World Economic Forum in 2011. It is to be noted that Gita is the third woman in the history of Harvard to be a tenured professor at its esteemed Economics Department and the first Indian since the Nobel laureate Amartya Sen to hold that position.
Meanwhile, Managing Director Lagarde – the first woman to head the IMF – has stressed on the need for more women in economic leadership positions. In recent past, she said that tackling gender inequality would certainly boost economic growth in developing nations. The IMF chief further said that it should be politically incorrect not to have women on company boards.

Talking to the media in the past, Gita had said: “When you’re growing up in India, everybody expects you to become a doctor or an engineer and not exactly an economist.” The newly-appointed chief economist had admitted that she had “absolutely zero administrative skills”, saying: “I was more of a geek, and better with my books than anything else.”
Just a day after Lagarde confirmed Gita’s appointment as the IMF chief economist, the Nobel Prize for Physics was awarded to a woman for the first time in 55 years. On October 2, the Norwegian Nobel Committee announced that University of Waterloo Professor and Guelph native Donna Strickland would share the 2018 prize in Physics with Gérard Mourou of France and Arthur Ashkin, a researcher at Bell Laboratories in New Jersey, for creating the shortest and most intense laser pulses that are now used in laser eye surgery to restore vision for millions of people. 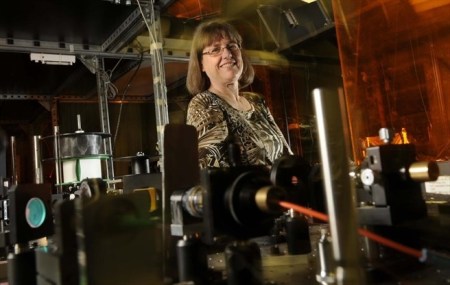 It is to be noted that Professor Strickland is the first female to achieve the accolade since Maria Goeppert-Mayer in 1963 and only the third woman in history. The first being Marie Curie.