In a letter to his publisher friend, he wrote: “You can publish those short stories after my death.” Why he said so…….? Because, he wrote about war and also about inevitable destruction. He was not a regular soldier, but he told the story of some soldiers who had sacrificed their life for France during the WWII. Surprisingly, the author considered his own stories as shocking. “I suppose they (the stories) are a little shocking since they deal with irregular troops and combat and with people who actually kill people,” he told publisher Charles Scribner Jr.
One of those stories has recently been published in the Strand magazine. The manuscript – 15 pages written in pencil – has been stored for decades in the permanent Hemingway collection at the John F Kennedy Presidential Library and Museum in Boston. And the story triggered a sensation immediately after it was published……. as if it’s the Nobel Literature Laureate’s return to the public. A Room on the Garden Side, written in the context of the WWII, helps readers discover the real Ernest Hemingway. He narrated the defeat of the Nazis (in Paris and also in other parts of the world) in this story. Although the author tried to explain how a war changes our life in this novel, he actually discovered himself in a different way.

In fact, Hemingway left numerous works unpublished at the time of his suicide in 1961. A Moveable Feast, his celebrated memoir on Paris in the 1920s, came out three years after his death. Other posthumous Hemingway books include the novels “The Garden of Eden“, “Islands in the Stream” and “The Dangerous Summer“, a nonfiction account of bullfighting. Hemingway wrote other WWII stories over the last decade of his life. In August 1956, he told Scribner that he had completed five: “A Room on the Garden Side“, ‘‘The Cross Roads“, ”Indian Country and the White Army“, ”The Monument” and “The Bubble Reputation”. So far, only “The Cross Roads” has been widely seen.
Readers can easily discover Hemingway’s particular fondness for Paris in his writings…. and ‘A Room on the Garden Side’ is no exception. There is a strong presence of the French capital and the Paris-based Hôtel Ritz in this story. In an editorial note, Strand Managing Editor Andrew F Gulli wrote: “Hemingway’s deep love for his favourite city as it is just emerging from Nazi occupation is on full display, as are the hallmarks of his prose.” It is to be noted that Hemingway used to say that he liberated the Ritz bar from the Nazis and he was proud of that. Robert, the narrator, tells the story from Hôtel Ritz. Like Hemingway, Robert’s nickname is ‘Papa’. So, many believe that Hemingway narrated his own story through the main character, Robert, in this novel. 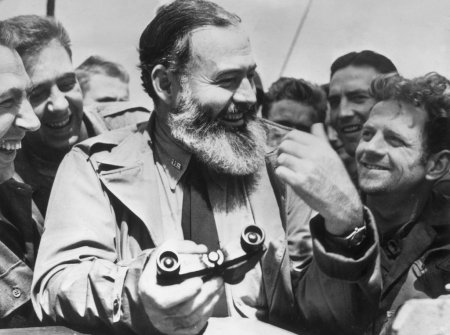 Ernest Hemingway surrounded by American soldiers in France, months before Allied troops liberated Paris from the Nazis. A newly published short story, ‘A Room on the Garden Side‘ takes place in Paris shortly after the liberation.

1944…. the Nazis just left France…. and the tired French soldiers were getting ready to leave the hotel next day! The soldiers gathered at the bar to enjoy wines for the one last time together. Robert – who was also present there – was reciting Baudelaire, Victor Hugo and Marcel Proust’s poems to remove fatigue. Robert was actually trying to explain why he, despite being a writer, picked up the weapon. To make his arguments acceptable, he said: “I did it to save the lives of people who had not hired out to fight.” Hemingway, perhaps, remained as the only person who could relate poetry to fatigue.
In this short story penned in 1958, Hemingway showed that the concept of class-difference was there among the soldiers. Commenting on a colonel, Robert says: “He does not look at us because we are indecent and in-disciplined Americans.” In fact, war used to motivate Hemingway. That’s why he discussed various war-related issues in ‘A Room on the Garden Side‘. Hemingway’s victorious soldiers not only expressed grief for their comrades who sacrificed their life in the battlefield, but also expressed doubt about whether the Fascist aggression could destroy the ‘culture of Paris’.

Hemingway was well aware of the Fascist aggression and war. He was not a passive watcher, but an active participant. He co-ordinated with the soldiers and also worked as a journalist stationed in the battlefield, apart from serving as a Red Cross ambulance driver in Italy during the WWI. He was seriously injured in a mortar attack in Italy. In a letter to one of his relatives, Hemingway mentioned that there were 227 wounds in his body.
In the hospital, he met Agnes Hannah von Kurowsky, one of the great loves of his life. Agnes, the 26-year-old American nurse cared for Hemingway as he recuperated. Both Hemingway and Agnes fell in love and enjoyed their relationship for a couple of years. However, Agnes announced that the relationship was over on March 7, 1919. Later, Hemingway described different aspects of war, love and refusal in his novel ‘A Farewell to Arms’ (1929). In the same way, he told the story of Robert Jordan, a young American in the International Brigades attached to a republican guerrilla unit during the Spanish Civil War, in ‘For Whom the Bell Tolls’ (1940). All the characters – Jake Barnes (The Sun Also Rises), Harold Krebs (Soldier’s Home) and Nick Adams (Big Two-Hearted River) – created by Hemingway experienced the ravages of wars.

War became his real love in the early 20th Century. As far as Hemingway’s personal life is concerned, love didn’t stay long…… as he got married four times. War, too, didn’t allow him to live a peaceful life. He was charged with war crimes under the Geneva Convention when he took command and led of a group of French militia into battle against the Nazis. Later, he said: “I had a certain amount of knowledge about guerrilla warfare.” He had this guts. Hemingway became a ‘War Hero’ after his return from Italy in the post-WWI period. While he was popularly known as a ‘skilled hunter’ in Africa, his unusual fishing and U-boat hunting habits made him famous in Cuba.
Hemingway deliberately ignored his ‘super masculine‘ image, as he used to believe that a writer should isolate himself from the world and concentrate only on his work. Hemingway was awarded the Nobel Prize in Literature for his novel ‘The Old Man and the Sea’ (1952) in October 1954. He decided against travelling to Sweden because of his poor health condition. In his absence, the then US Ambassador to Sweden John C Cabot read Hemingway’s Nobel acceptance speech at the City Hall in Stockholm on December 10, 1954. In his speech, the author said: “Writing, at its best, is a lonely life……..A writer should write what he has to say and not speak it.”

It’s not that Hemingway’s life was full of adventurism, as there were also some endangered surprises in his life. So, he killed himself in 1961 with his favourite shotgun bought from Abercrombie & Fitch. Perhaps, he inherited the suicidal tendency from his forefathers. His father, brother and sister, too, had committed suicide. His father had shot himself behind his right ear with his .32 Smith and Wesson revolver on December 6, 1928. Hemingway, then in New Jersey, received a telegram – bearing the news – from his brother. Although he did not allow his father’s death to distract him from finishing ‘A Farewell to Arms’, the death haunted Hemingway for the rest of his life. Once, he admitted that I’ll probably go the same way”.
Suicide was not the end…… People across the globe still remember Hemingway’s words: “A man can be destroyed, but not defeated.” (Old Man and the Sea).