Time is an inalienable component of eternal love. Love is like a fairy tale for some and for others, it’s a chronicle of pain. The concept of love varies from one person to another. The love story of Khalil Gibran (sometimes spelled ‘Kahlil’) and Mary Haskell, it may be said, is somewhat different…. But, before trying to pen-down a word or two about them, a story that is more recent has seemingly followed their path in a way. The characters involved here are Mani Lal Bhaumik – an Indo-American Physicist – and his love in 1960s.
Khalil – a Lebanese-American writer, poet, visual artist and Syrian nationalist – was born in Bsharri near the Mount Lebanon Mutasarrifate on January 6, 1883. He became famous because of his ‘The Prophet’, a book of 26 prose poetry fables published in 1923. The book has been translated in over 40 different languages and has never been out of print.
Khalil, along with his mother, left for the US in 1895 and settled in (South) Boston. He met Mary Elizabeth Haskell at the inauguration of his first showing of charcoal drawings. Haskell, 10 years Khalil’s senior, was a respected headmistress of a prestigious girls’ school in South Carolina. It was just the beginning of a great love story…….
The age difference between the two didn’t create obstacles in their relation. At that time, Khalil was a promising young painter and Haskell was a huge fan of his paintings. Haskell immediately decided to send Khalil to Paris to study art for two years. She even arranged a stipend of USD 75 (per month) for the young talent! In a letter to a friend written shortly before he departed for Paris in 1908, Khalil described Haskell as “a she-angel who is ushering me toward a splendid future and paving for me the path to intellectual and financial success”. Shortly after his arrival in Paris, he wrote: “The day will come when I shall be able to say, ‘I became an artist through Mary Haskell.’” 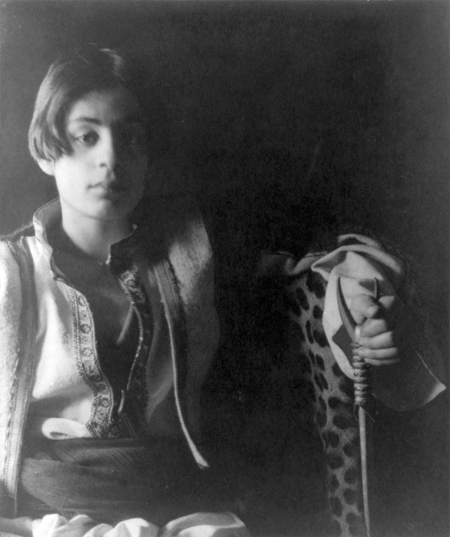 The two shared an important friendship that lasted the rest of Khalil’s life. Haskell not only spent a huge amount of money to support Khalil, but also edited all his English writings. The nature of their romantic relationship remained obscure, with some biographers saying that the two were lovers, although they never married. However, other evidence suggests that their relationship was never physically consummated. According to some sources, Khalil didn’t intend to marry her as he had affairs with other women. Later, Haskell married another man, but continued to support Khalil financially and used her influence to advance his career.
Haskell’s generosity was not limited only to financial help. The ‘liberal lady also possessed a simple softness, which fascinated Khalil. Khalil never considered her as a mere friend, as he was touched by Haskell’s ‘positive’ spirit. She was astonishingly sympathetic towards Khalil. It’s a fact that he was able to establish himself as an artist only because of Haskell, but her love helped Khalil find a real human being inside him.

Khalil and Haskell’s long love story is well preserved in some invaluable letters, which have been summarised in a book, titled ‘Beloved Prophet: The Love Letters of Kahlil Gibran and Mary Haskell and Her Private Journal’. These letters help us understand that they had enriched each other without tying the nuptial knot.
In such a letter, Khalil described how he missed Haskell in Paris. He was in the French capital from 1908 to 1910. During this period, he wrote: “When I am unhappy, dear Mary, I read your letters. When the mist overwhelms the ‘I’ in me, I take two or three letters out of the little box and reread them. They remind me of my true self. They make me overlook all that is not high and beautiful in life. Each and every one of us, dear Mary, must have a resting place somewhere. The resting place of my soul is a beautiful grove where my knowledge of you lives.” Ahead of Christmas (most probably in 1908-09), Khalil wrote to Haskell: “I think of you today, beloved friend, as I think of no other living person. And as I think of you Life becomes better and higher and much more beautiful. I kiss your hand, dear Mary, and in kissing your hand, I bless myself.”

Their relationship intensified in the next few years. And the day before her 37th birthday in 1910, Haskell wrote: “Kahlil spent the evening. Told me he loved me and would marry me if he could, but I said my age made it out of the question. ‘Mary’, he said, ‘whenever I try to get nearer to you in speech, to be personal at all – you fly up into remote regions and are inaccessible.’ ‘But I take you with me,’ said I. And I said I wanted to keep our friendship enduring, and feared to spoil a good friendship for a poor love-affair. This was after Kahlil had explained what he meant. The next afternoon, Kahlil was here a while and I told him yes.”
In 1910, they took a decision (that was veritably radical at the time) not to get married after all, but to remain each other’s most intimate partner in life. In April 1911, Haskell described their decision with remarkable poeticism, saying: “It seemed to me that it was the moment of the opening of the door between Kahlil and the world that shall love him and into whose heart he shall surely feel he is pouring his work. I think his future is not far away now!” She further said: “And so I made up my mind to follow what seems to me the final finger of God – I put definitely to myself the possibility of being his wife. And though every waking hour since has been drenched with inner tears, I know I am right, and that the tears mean joy, not pain, for the future.” “My age is simply the barrier raised between us and the blunder of our marrying. Not my age constitutes the objection – but the fact that for Kahlil there waits a different love from that he bears me – an apocalypse of love – and that shall be his marriage. His greatest work will come out of that – his greatest happiness, his new, full life. And it is not many years distant. Toward the woman of that love, I am but a step. And though my susceptible eyes weep, I think of her with joy – and I don’t want to have Kahlil, because I know she is growing somewhere for him, and that he is growing for her,” added Haskell.

Next day, Haskell informed Khalil about her firm decision, saying: “My heart longs to be over-persuaded. Still I know in the end I should not be persuaded.” She wrote in her diary: “He wept and I got him a handkerchief. But he could not speak. Near the beginning in one of my many pauses he said brokenly, “Mary, you know I cannot say things, when I am this way,” and hardly another word. The only comment he made was to love me. When it was over I opened my arms to him – but he soon had me in his, and the heart is not flesh that would not have been comforted…. When it grew late I put his right palm to my lips – and then indeed the tears came – but they drew me simply nearer to him. I kissed that wonderful hand as I have often longed to do, but as I have not before, because a mere touch on it moves him so. It answered like a heart… Again at the door I cried a little – while he wiped my eyes, saying only, ‘Mary – Mary – Mary.’ And as he went he said as well as he could, ‘You’ve given me a new heart tonight.’”
We often talk about ‘unselfish love’. In reality, it’s just an extension of the sense of right. However, Khalil and Haskell’s love was like a cool pond, wave-less and deep, but stable. The relationship didn’t bind the two, but freed or liberated them. That freedom or liberation helped both Khalil and Haskell create their self-images.

Later, Haskell married another person. Khalil, too, had a number of girlfriends. However, Haskell and Khalil’s eternal love belonged to a different level where only they could reach. They enjoyed their closeness, as well as their distance in a different way. Their love always followed a straight line. It was possible only for them to feel their love-life.
Most Persian poets – including Jalal-ud din Rumi, Hafiz and Nizami – presented a beautiful lady in their novels and portrayed her as a ‘sacred soul’ or ‘Alamat-e-Pakeezgi’ or a ‘symbol of sanctity’. Khalil Gibran was the successor of that particular tradition.