In 1968, a group of students in France organised themselves against the patriarchal leadership and got into a massive confrontation with the Police. The ‘revolt’ – popularly known as ‘Paris Spring’ – was joined by the wider mass (and most specifically the factory workers) that eventually brought the French government at a point of collapse. As France marks the 50th anniversary of the ‘Student Revolt’ this year (with a recognition to it as a “social revolution rather than a political revolution”), it has become necessary to discuss the ‘historical blunder’ made by the French Communist Party (PCF) and its labour wing, the General Confederation of Labour (CGT), at that time. Perhaps, the movement failed to attain its goal mainly because of the PCF and the CGT’s ‘betrayal’. The revolt would have been a ‘successful’ one, if the leadership of the Communist Party agreed to take the ‘responsibility’. Erik Hagen has described the functioning of the contemporary Communists as “a normal treason”. 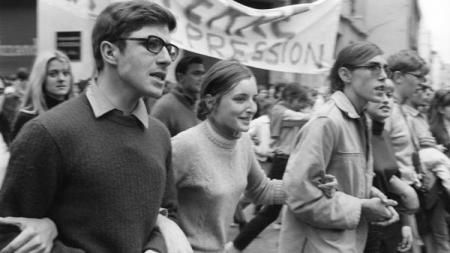 At the end of April 1968, the top CPF leadership portrayed the student revolt at Nantes University as an ‘anarchist movement’, asking the party members not to allow students to influence the workers. An article – titled ‘The fake revolutionaries unmasked’ – was published in CPF mouthpiece ‘L’Humanite’ on May 3 in which the party strongly criticised the students for paralysing the education system. However, the CPF leadership accepted the ‘validity’ of the movement on May 7. Participation from the factory workers inflamed the student movement, as 300,000 students and workers marched through the French capital on May 13 under the slogan: ‘Egalité! Liberté! Sexualité!’ (Equality! Freedom! Sexuality!). 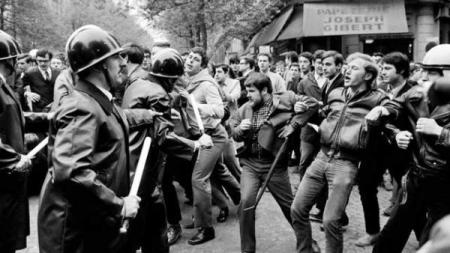 Clashes between police and students

Unfortunately, the student-worker unity was quite fragile. Eileen Creedon, a French communist and a follower of Trotsky, opined that although the workers had joined hands with students, their views were completely different. The pro-Soviet CPF leadership was not interested in any radical (or revolutionary) changes at that time, while the French students – inspired by Marxist-Leninist ideology – were eager to establish a society free from exploitation. It is to be noted that the representative of the bourgeoisie (!), Nikita Sergeyevich Khrushchev, came to power in Moscow after the demise of Joseph Stalin and he had an overwhelming influence on the PCF leadership.
While speaking at the National Assembly in May 1968, senior PCF leader Roland Leroy (indirectly) admitted that the party adopted a ‘compromising’ approach. He told the House: “Communists are not anarchists, whose only aim is to destroy everything without creating anything.” ……the French Communists failed to understand the fact that nothing could be created without destroying anything! Even PCF General Secretary Georges Marchais called student leader Daniel Cohn-Bendit a ‘German anarchist‘.

Although various types of Leftists – such as Maoists, Trotskyists and anarchists – were there in France in the 1960s, workers used to follow the ‘PCF line’. The party had nearly two million members and 40% of them belonged to the working class. As a result, the PCF leadership concentrated only on meeting the economic demands of the working class people and refused to support the student movement.
The PCF leaders agreed to end the strike as per the ‘Grenelle Agreements’ signed on May 27, 1968 between the government and the trade unions at the Ministry of Labour. The party welcomed the Charles de Gaulle administration’s decision to hike the salary of government employees (by 10%) and workers (by 35%), and to recognise trade unions. However, the workers and the students rejected the Grenelle Agreements, accusing the PCF of betraying their movement. President de Gaulle’s resignation should not be considered as the victory of French communists because the authoritarian ruler was succeeded by former Prime Minister Georges Jean Raymond Pompidou.

Striking workers at Renault car factory in Boulogne-Billancourt listen to CGT trade unionist speech on May 17, 1968.

It was just the beginning of the fall of Marxism in Western Europe. The Paris Spring exposed the real character of the mainstream French communists and the PCF managed to secure just 21.27% of votes in 1969 election. The party became irrelevant in French politics in the 1970s and 1980s. In 2017 National Assembly Election, the PCF received only 2.7% of votes. A historic blunder in 1968 ruined the party (forever)! However, the global community still remembers the French students’ struggle to achieve ‘Egalité! Liberté! Sexualité!’ and the spirit of their movement.
In every sense, May ’68 was a turning point in French history (as well as in world history).